I call this species the Stone Dragons which will be explained to you in a while. I'm going to show the steps into making this dragon and how I felt :) 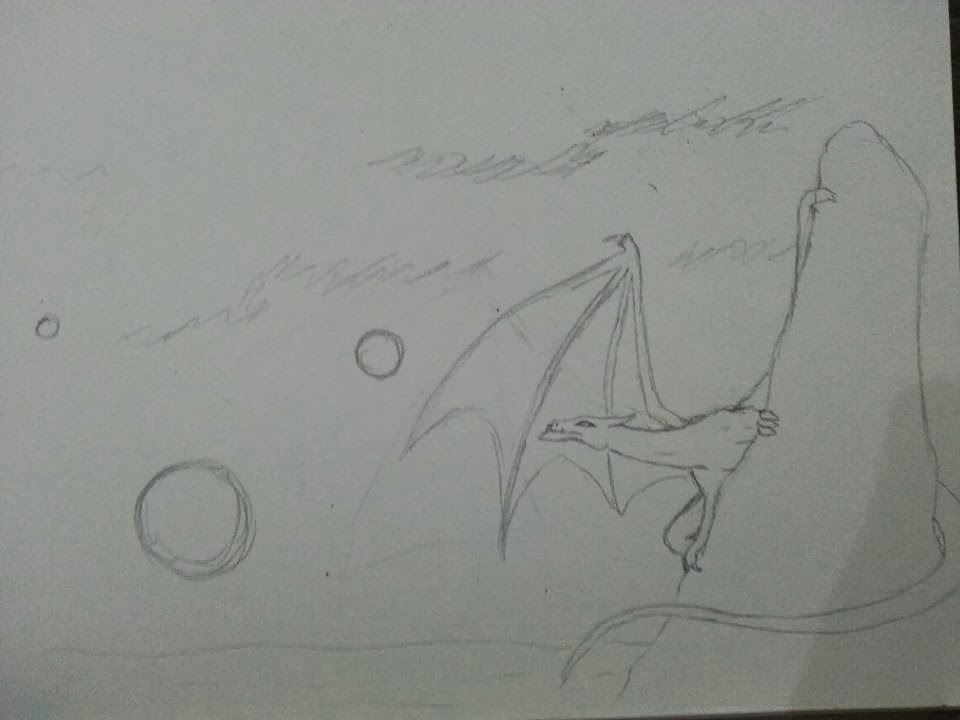 This is just the rough sketch 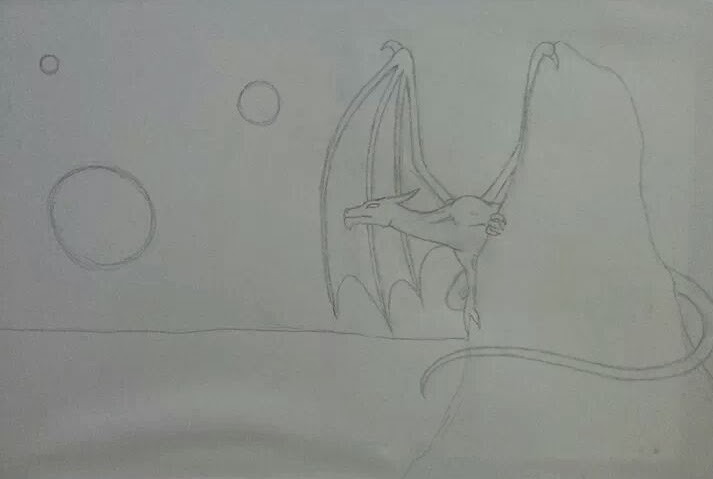 This was officially on canvas already :) 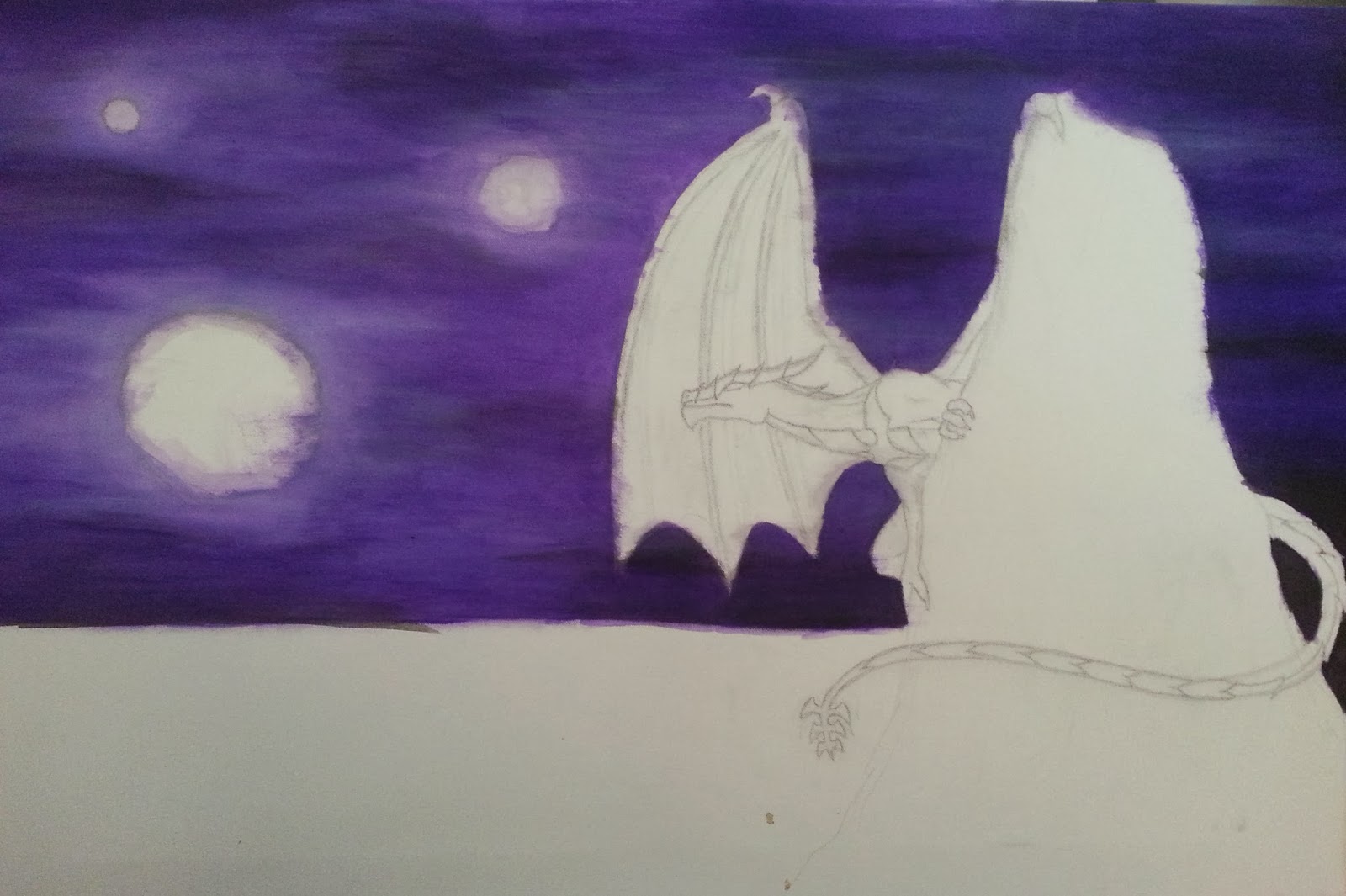 At this point here, I didn't touch it for like 5 months. I didn't feel comfortable with the scene. It was too complex for me so I chicken out. It's a big jump from my normal procedure 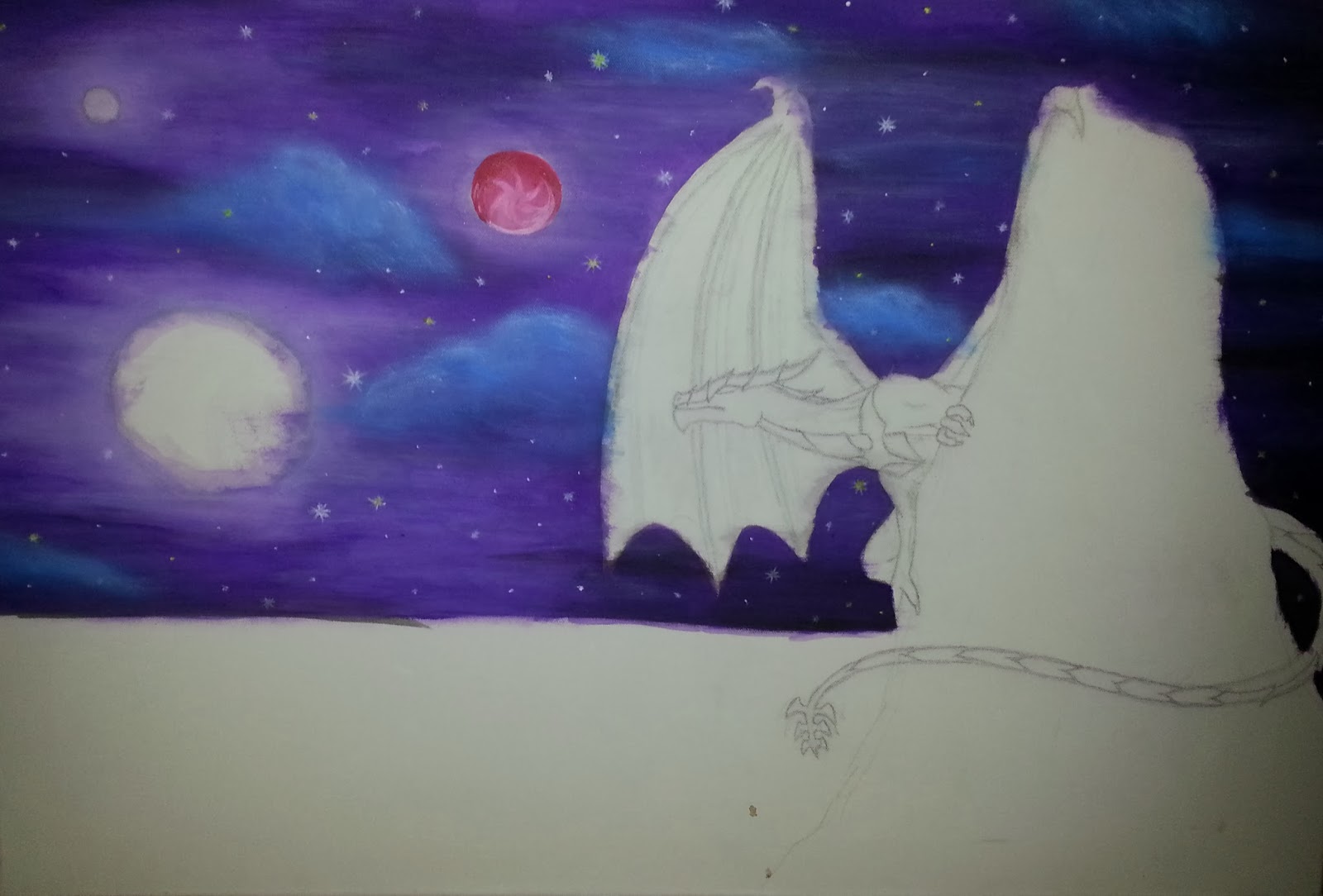 After those months, I started again, telling myself one step at a time 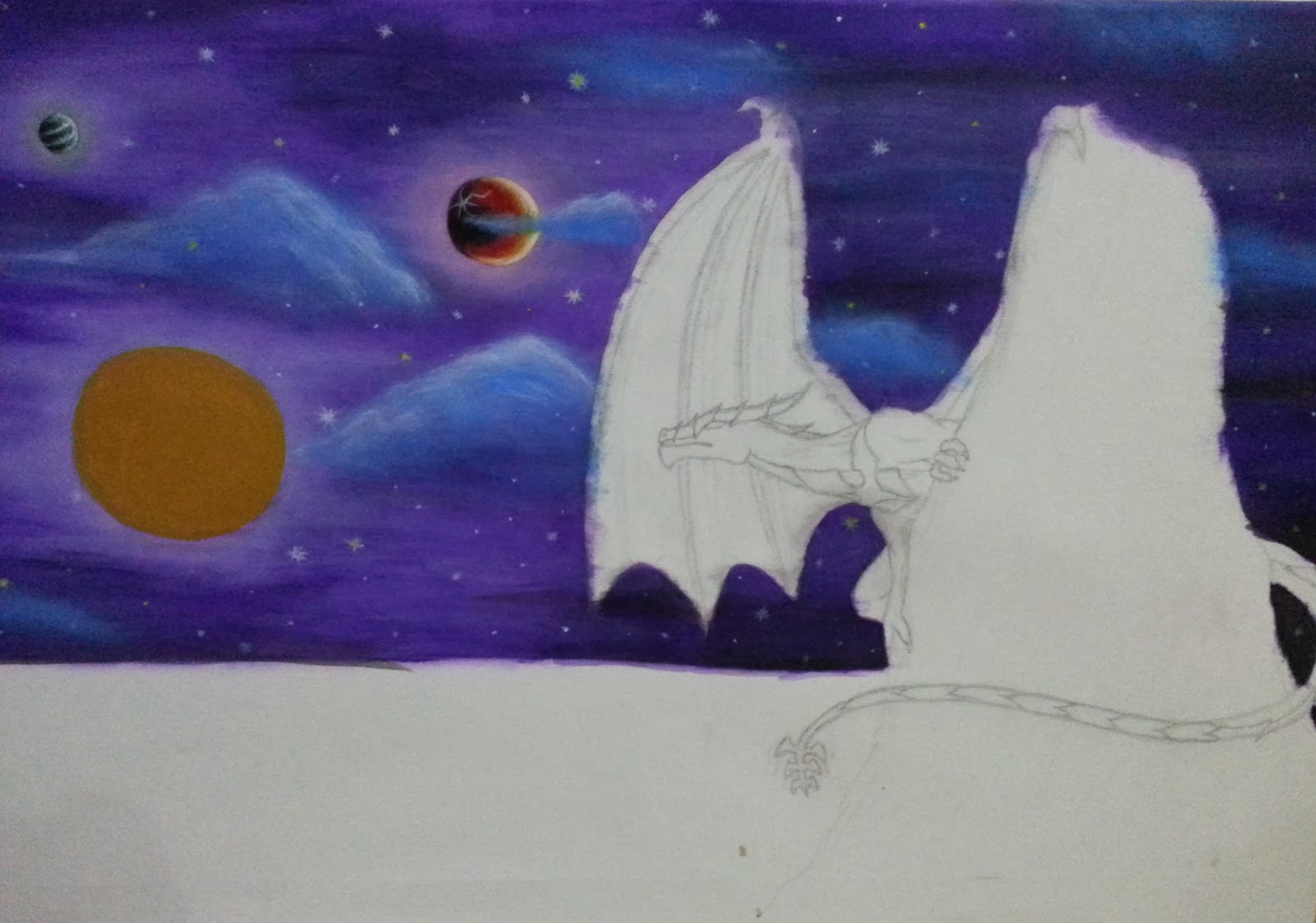 from one moon, it became two then three :) 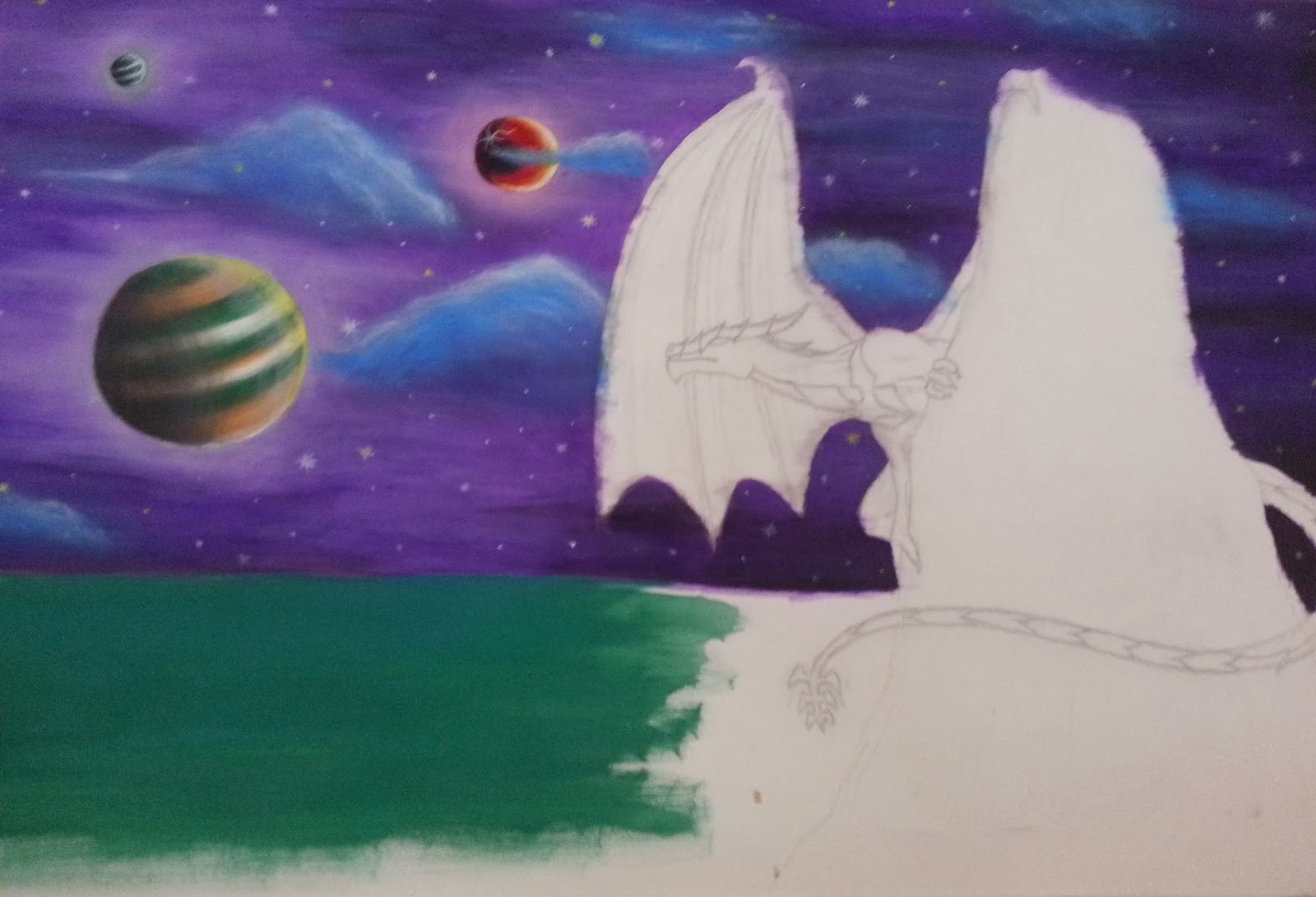 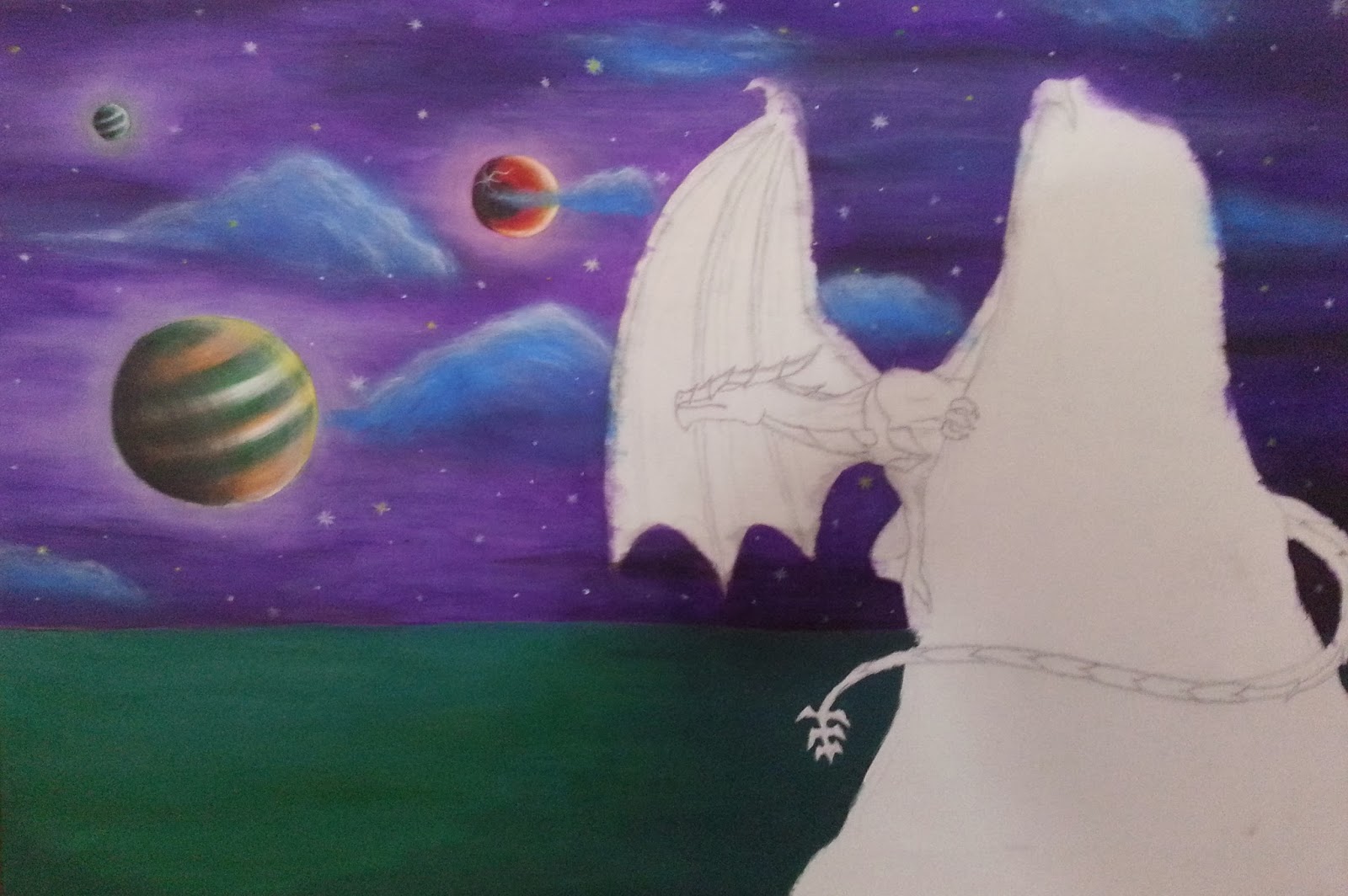 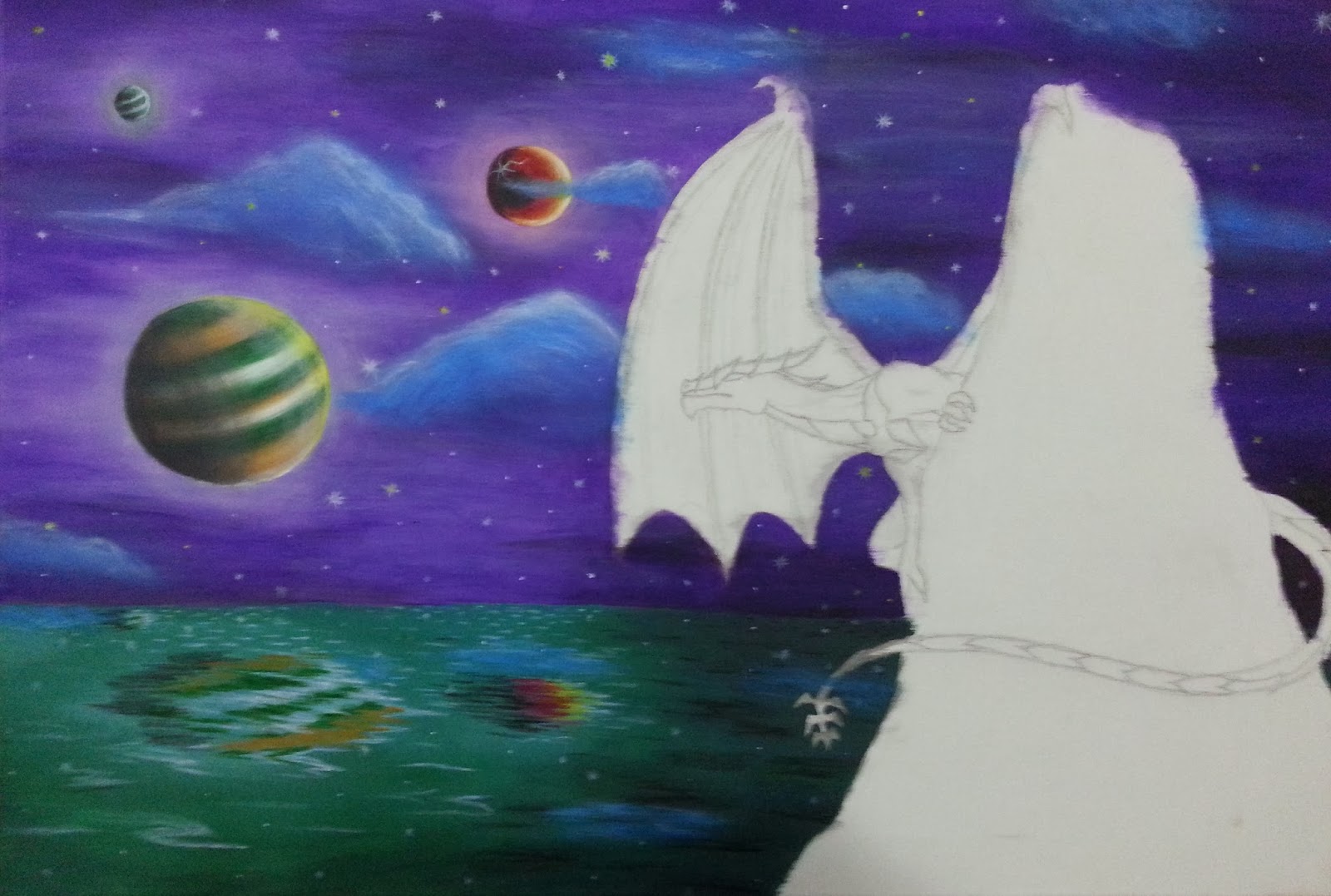 I was scared of the waters for the most part. It HAD to look like water 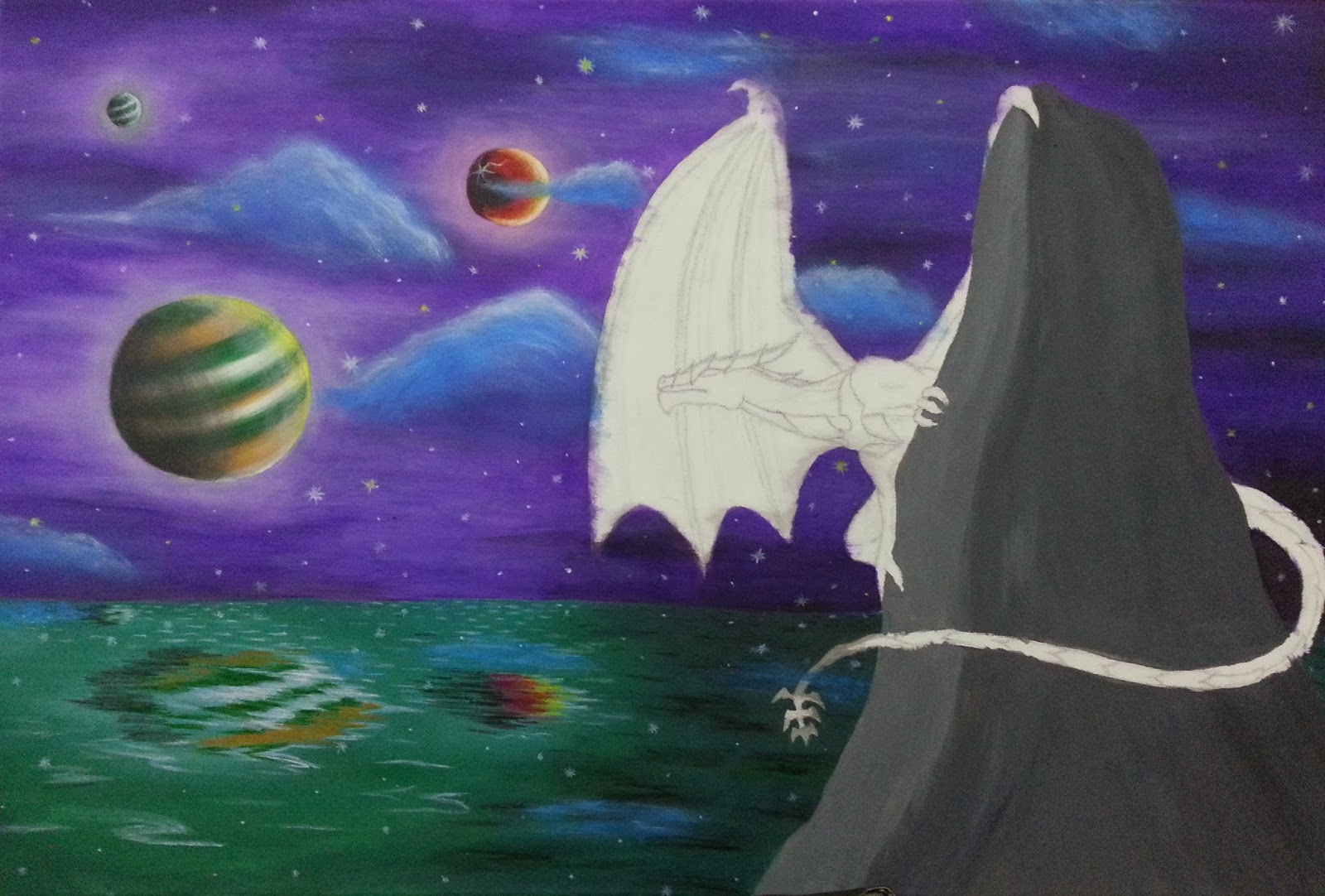 The rock was another roadblock in my head for me 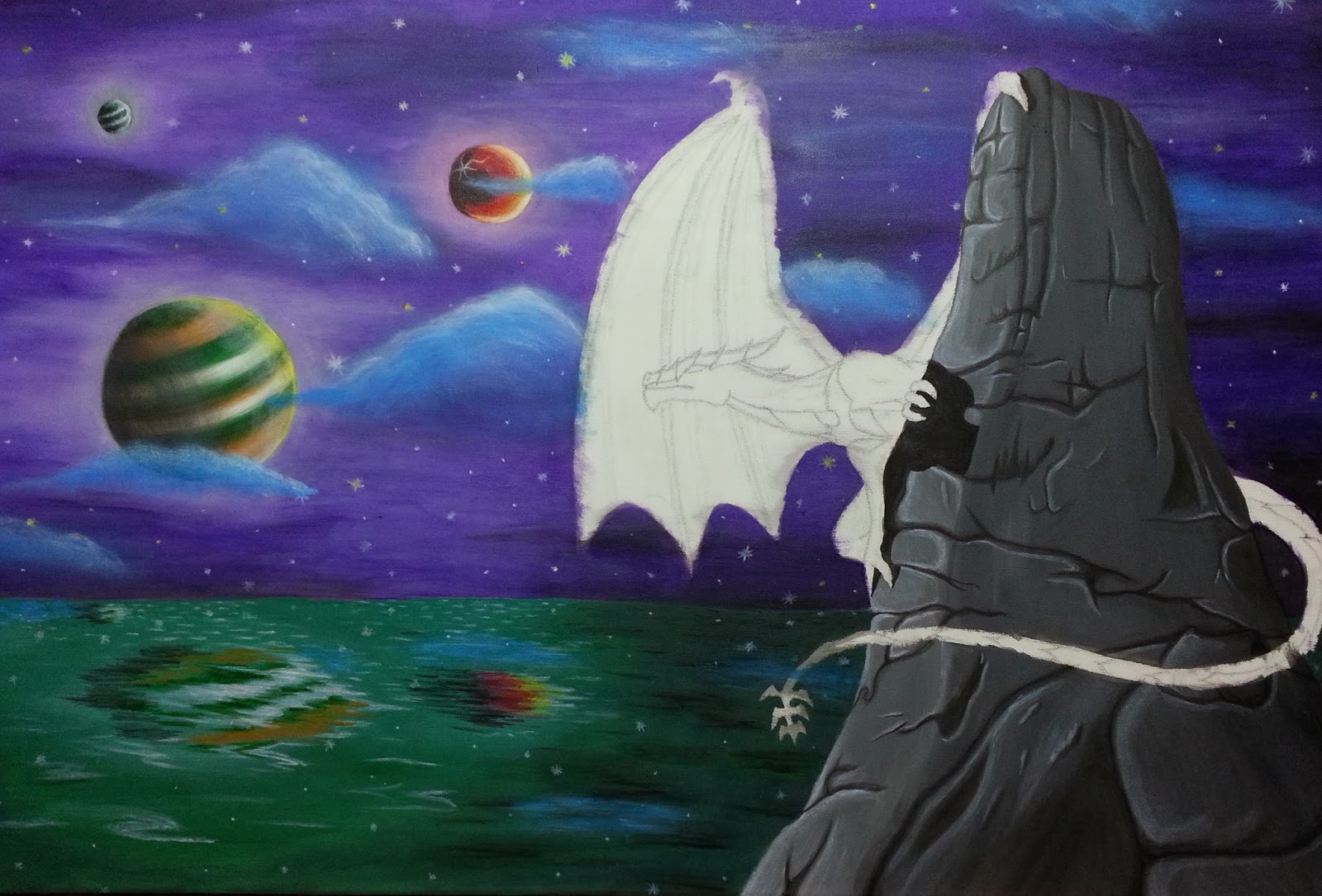 But after that roadblock, I think I did pretty alright 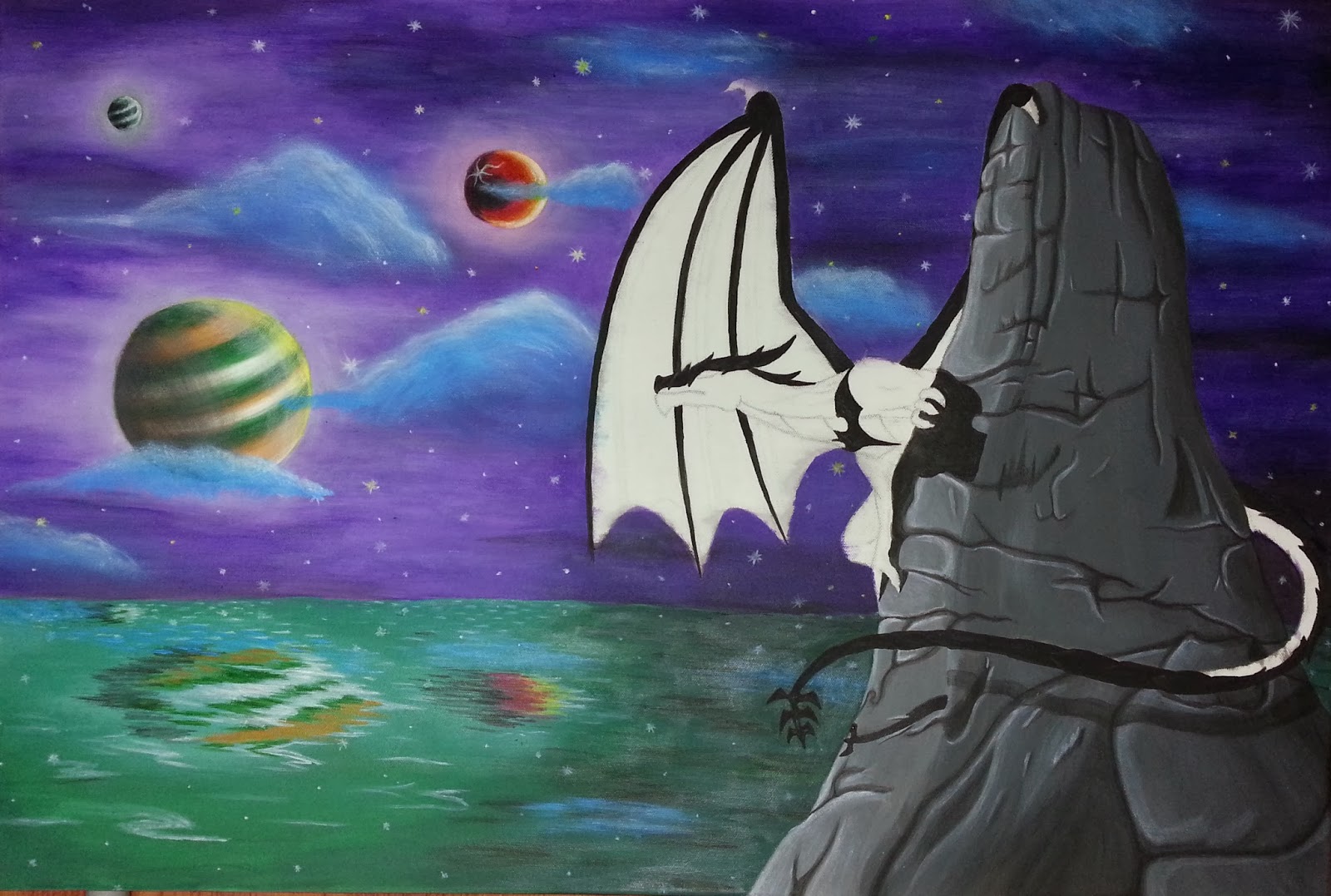 Time to bring the dragon to life 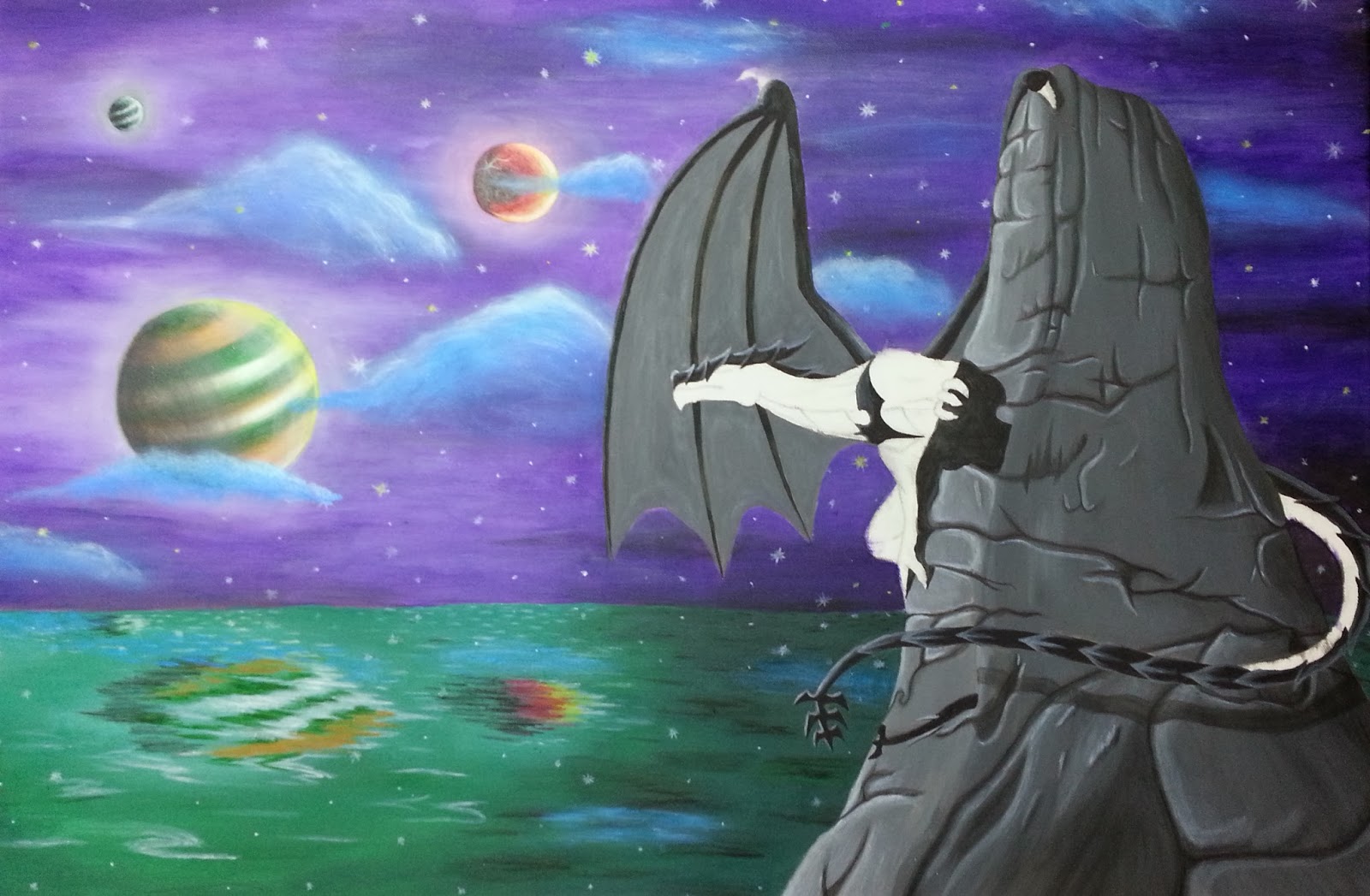 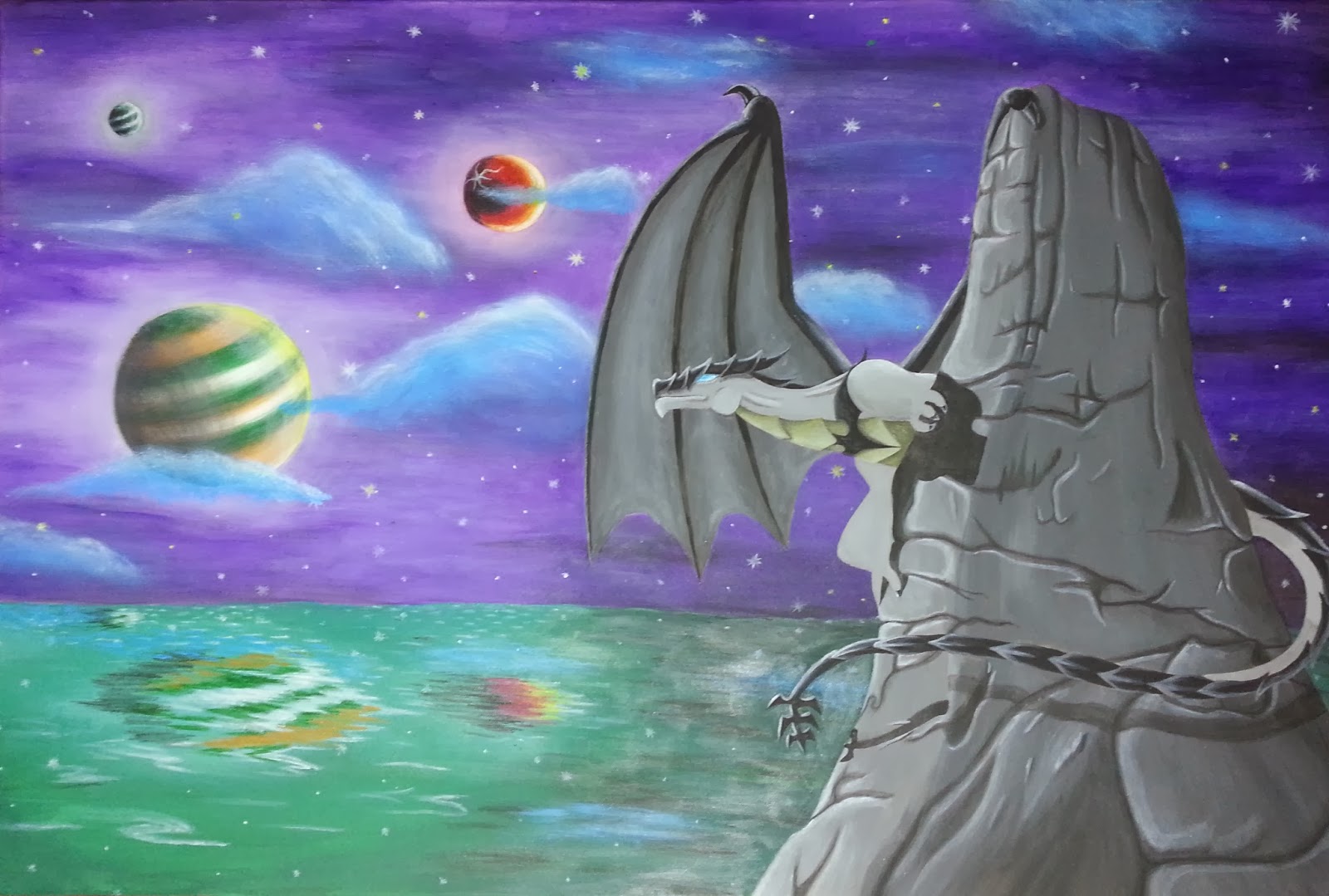 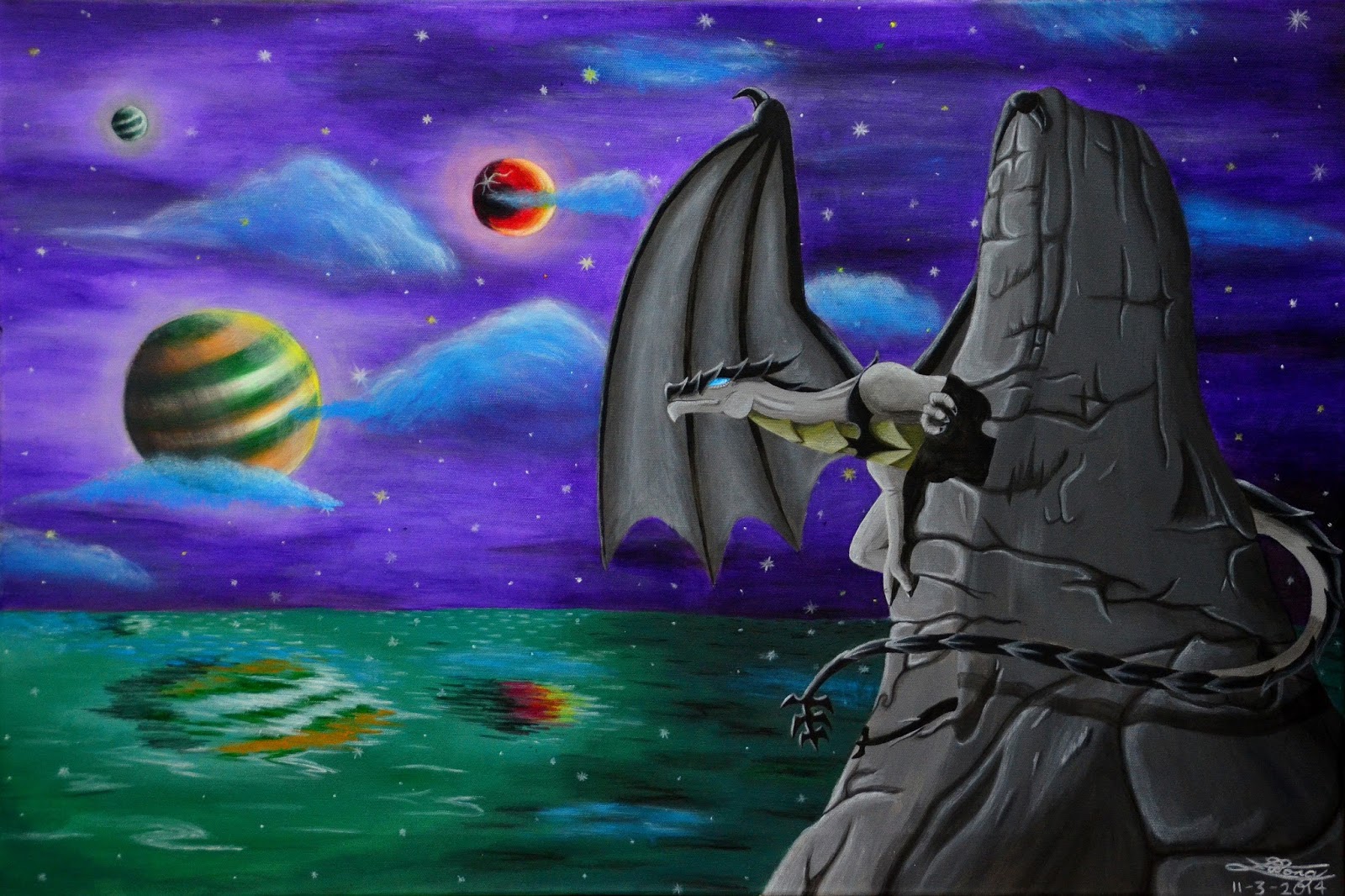 Stone dragons hunt in pairs (mates) or threes (siblings). A female dragon will lay 3 eggs. Usually 1 or 2 will survive, if they're lucky, all 3. The siblings will grow up, learning how to hunt by observing their parents. Once they are old enough, they will part from their parents to hunt together for a few years. Once they are matured and have found a mate, they will eventually part ways and the cycle continues.

Stone dragons hunt in rocky mountains. With its rocks like marbles, showing a colour of grey white. The dragons use their coloured scales to camouflage with the rocks. Due to the dragons fiery breath, it scorches the rocks, causing it to be black. Hence the dragon in black and grey.
This dragon, however, is a rare one. He does not socialise with others, often keeping to himself and not wanting to mingle. He is close to maturity but show no want for a mate. It is unknown of what happened to his previous family.

This spot seems to be his favourite as he often spends his nights here. It is very quiet and serene with a beautiful scenery of a purple sky, blue clouds and twinkling stars. The night being lighted by the planet's 3moons. With its waters reflecting it's beauty. He sits here, enjoying his solitude where no other creature can disrupt his sense of meditation. This is where he feels most at peace. Alone with his thoughts

This was inspired as I read my batman comics. I felt I could relate to batman not in terms of justice and whatnot but that moment when he sits on the gargoyle while watcing his city carry on. The gargoyle is the only place (I believe) that he feels at peace. At the batcave it's filled with sorrow memories like the death of Todd.... Caching the Joker, Barbara in a wheel chair etc. Nope, on the gargoyle, he just sits there.. Watching. Watching the world carry on, not noticing you were even there observing. Being by yourself feels great. Sometimes, having a Robin or superman in your life is good and all but it is not the same as being  yourself. You don't have to make conversations with anybody and you can appreciate it for as long as half an hour and you won't have anybody trying to rush you to get outta there or wonder if they should break the silence. It's just you... And the world. Just you.
Labels: art drawings painting