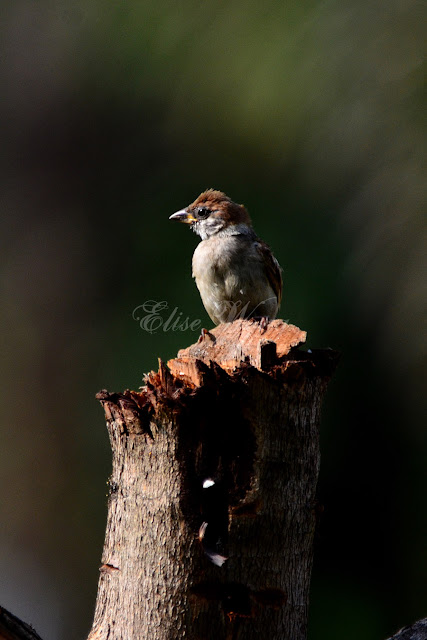 Diet: It eats weed seeds, such as chickweeds and goosefoot, spilled grain, and it may also visit feeding stations, especially for peanuts. It will also feed on invertebrates, especially during the breeding season when the young are fed mainly on animal food; it takes insects, woodlice, millipedes, centipedes, spiders and harvestmen.

Breeding: The Eurasian Tree Sparrow reaches breeding maturity within a year from hatching, and typically builds its nest in a cavity in an old tree or rock face. Some nests are not in holes as such, but are built among roots of overhanging gorse or similar bush. Roof cavities in houses may be use. The male calls from near the nest site in spring to proclaim ownership and attract a mate. He may also carry nest material into the nest hole.

Relationship With Humans: The Tree Sparrow is seen as a pest in some areas. In Australia, it damages many cereal and fruit crops and spoils cereal crops, animal feed and stored grain with its droppings. Quarantine rules prohibit the transport of this species into Western Australia

Chairman Mao Zedong of China attempted in April 1958 to reduce crop damage by Tree Sparrows, estimated at 4.5 kg (9.9 lb) of grain per bird each year, by mobilising three million people and many scarecrows to drive the birds to death by exhaustion. Although initially successful, the "great sparrow campaign" had overlooked the numbers of locusts and other insect pests consumed by the birds, and crop yields fell, exacerbating a famine which led to the deaths of 30 million people between 1959 and 1961. The Tree Sparrow's consumption of insects has led to its use in agriculture to control fruit tree pests and the common asparagus beetle, Crioceris aspergi

sources from AllAboutBirds and Wikipedia