Personally, if people were to donate to dog shelters, I think the top priority should be neutering. Shelters have been saying again and again to spay but ignorant pet owners still let their fertile dogs roam free to... copulate. In fact, if majority dogs were spayed, there wouldn't be a need for so many shelters. Lets imagine... If stray dogs were caught, spayed and released, we wouldn't worry so much about these strays producing more.

Think about it. Why we need shelters is because dogs multiply leaving puppies vulnerable to death mostly caused to starvation or neglect but predation could be a factor. Of course, there will be the owners who abandoned their dogs or dogs who really needs a shelter. If all strays were spayed, shelters wouldn't necessarily have to take them in. This can eliminate the problem of pet overpopulation. Some dogs and cats are street smart and learn to adapt really well in the city and not all of them need to be caged. Thus, if all strays are neutered, it is a huge benefit. Plus, with all those money currently spent on shelters, donations or animal control... with pets neutered, we can actually use those 'potential' money for more important things such as conservation. I believe conservation is the bigger problem, especially today. Many living things are going extinct because of us. The world can live without us but we cannot live without the world, humans need to learn to respect that.

Anyways, I did some research to convince you more so here it goes;

1. How is spaying beneficial to the owner?
- lower vet bills & less prone to a variety of diseases. Spayed females have a lower risk of breast cancer (90% fatal in cats and 50% fatal in dogs) and life-threatening uterine infections.

- Neutered males have no risk of testicular disease and a lower risk of prostate diseases. Plus, the cost to have your pet spayed or neutered at All About Animals’s low-cost spay/neuter clinic is a lot less then the cost to have and care for a litter or litters.

- Better pet behavior! A spayed female won’t go into heat which will prevent yowling, frequent urination and discharge. Neutered male dogs are usually better behaved and will not feel the need to mark their territory. A neutered male dog won’t be as inclined to roam in search of a mate; roaming animals can cause vehicular accidents and scare children.
- prevent fights between pets. Fights between pets can be serious, causing deep wounds and transmitting deadly diseases. Neutered males tend to be less aggressive to both animals and people, especially if neutered at an early age.

How is spaying/neutering good for the community?
- less stray, homeless, unwanted animals. Communities spend millions of dollars to control unwanted animals. Stray and roaming (a behavior associated with breeding) animals can cause dog bites and attacks. Stray and homeless animals get into trash containers, or defecate in public areas or on private lawns. Spaying/neutering prevents unwanted litters and keeps more animals off the streets and out of already overburdened animal shelters and rescue groups.

Consequences of not spaying
- Female cats can breed three times a year and have an average of four kittens per litter.

- Dogs can breed twice a year and have an average of 6 – 10 puppies per litter. Female cats can breed as early as four months and dogs as early as six months!

So your dog is a pedigree and you can find owners for it's litter....
- For every human born in the United States, 45 cats and 15 dogs will be born. Six to eight million dogs and cats are waiting in shelters across the country; 25% of shelter animals are purebreds. About half will be euthanized because there simply aren’t enough homes. Every home found for one of your pet’s offspring – purebred or not – takes a home away from a purebred or mixed breed dog or cat waiting in a shelter. And, in less than one year’s time, each of your pet’s offspring may have his or her own litter, contributing to the pet overpopulation problem even further. The problem of pet overpopulation is created and perpetuated one puppy/kitten and one litter at a time.


Drawbacks? Will it affect my pet's character?
- Spaying/ neutering does not affect a pet’s natural instinct to protect the home and the family, and pets don’t have any concept of sexual identity or ego. A pet’s personality is formed more by genetics and his environment than by sex hormones so neutering will not change a pet’s basic personality or make him suffer any kind of emotional reaction or identity crisis.

No money to spay?
There are many non-profit organisations and I'm sure they are willing to neuter a pet for no charge if that is the case. Neutering a pet is a lot cheaper than feeding another six mouths in the future. If not, drop me a message I'll check in with the shelter I volunteer at and see if they can help with the spaying (I'm not a frequent volunteer but I'll do what I can). The spaying cost will normally cost around RM200, for your information.


Some people saw my photos of the dogs at Second Chance shelter which all looks quite cute and happy but I'd like to share the other side of the coin here. Life is hard, for some... more than others. Some dogs had it rough and finding it to trust humans can be very difficult. How can these dogs ever get a life? How can they ever be adopted?

Shelters should be temporary for dogs, in hopes of them finding a way better home than the shelter could offer, it shouldn't be permanent.. The shelter where I volunteer, it permits some dogs to run around free, however majority won't experience such a luxury. I've seen the same dogs caged or in the same kennel at each of my visit. Some, so afraid of me, they rather swim through their own faeces to get away from me. Literally, I've seen that happen with my own eyes.

Looking at Ruby, I just felt sad that she has to spend the rest of her life looking over her shoulder where danger only exist in her mind.


I'm sure you know so many cases where dogs undergo a painful livelihood having to do whatever it takes to survive but still, they are living under terrible conditions. They probably have wounds from fights that are infected with bacteria or maggots, they endure tick fever, dying of starvation, become road-kill, etc. That is not a quality way of life and not neutering dogs leaves these dogs to multiply even more giving way to more unnecessary deaths of dogs.

In addition, if majority of dogs are neutered, there would be less pressure and stress on dog shelters, fosters wont have to go through the trouble to care for the dog due to over flowing at the shelter, the potential donation can go to other causes like wildlife conservation. With neutering, we can help the community, shelters, volunteers, the dogs themselves and perhaps potential future puppies. In a way, it's a win-win-win-win-win situation.

Aside from the topic of neutering. A myth of shelters is that these dogs are damaged. I can assure you they are anything but. The cases above are the very few extreme cases. Mostly, they are just a bunch of loving, playful happy breed waiting to get your attention. I've adopted a couple of dogs and never regretted my decision, in fact, it was the best decision ever made.


American statistics say approximately 3-4 million dogs are euthanised each year. There is just too many dogs roaming the streets. Here is a picture I came across which share the advantages of having your dog neutered. 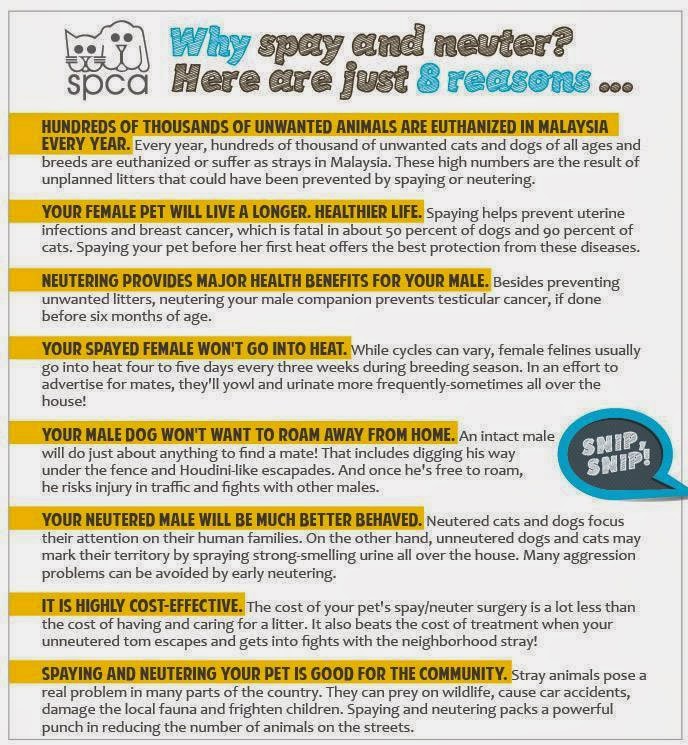 If you'd like to adopt, please check out if any of these dogs interests you or would you like to see other  candid photos of dogs from this shelter?
Labels: blog cause dogs