Graduating from university seemed like a true goodbye to certain classmates whom I've hang around for years. It just feels weird that we see each other almost everyday and suddenly.... it all stops. Our houses are very far from each other, having a university in the middle of the city with easy access to public transportation can bring students from all places of Malaysia. It only seemed fitting that our university would be our centre point to meet up and have a road trip.

From Kuala Lumpur, the drive to Kuala Gandah takes about one and a half hour. We packed lunch for a little picnic. Before my exams, I tend to wander from my studies and go on the internet to see what interesting places to go. There are many things I wish the people governing this beautiful country can teach and lead us in certain ways but most of all, I wish they taught us about how beautiful this country truly is. We don't even know what animals or trees are present in this land. We only know the famous endangered ones such as tigers, elephants, orangutans, turtles etc. But I bet that most Malaysians don't know we have dolphins, jaguars, clouded leopards, rhinos etc right here on the very earth we live on. I found a place in the Pahang area, there is a famous tourist attraction that helps orphaned elephants. An Elephant Sanctuary in Kuala Gandah. Before I go further, I suggest an ideal schedule on how to plan out your day, learning from trial and error.

Leaving Kuala Lumpur after 0800 hours, we reached our destination close to 1000 hours. You should drop by Deerland first before making a stop at the Elephant Sanctuary. For two reasons; 1) Deerland is two kilometres before the sanctuary and 2) Elephant activites will start at 1400 hours [depending on which day]. After that, returning to KL, a nice cool dip in Lentang forest's waters would be nice. 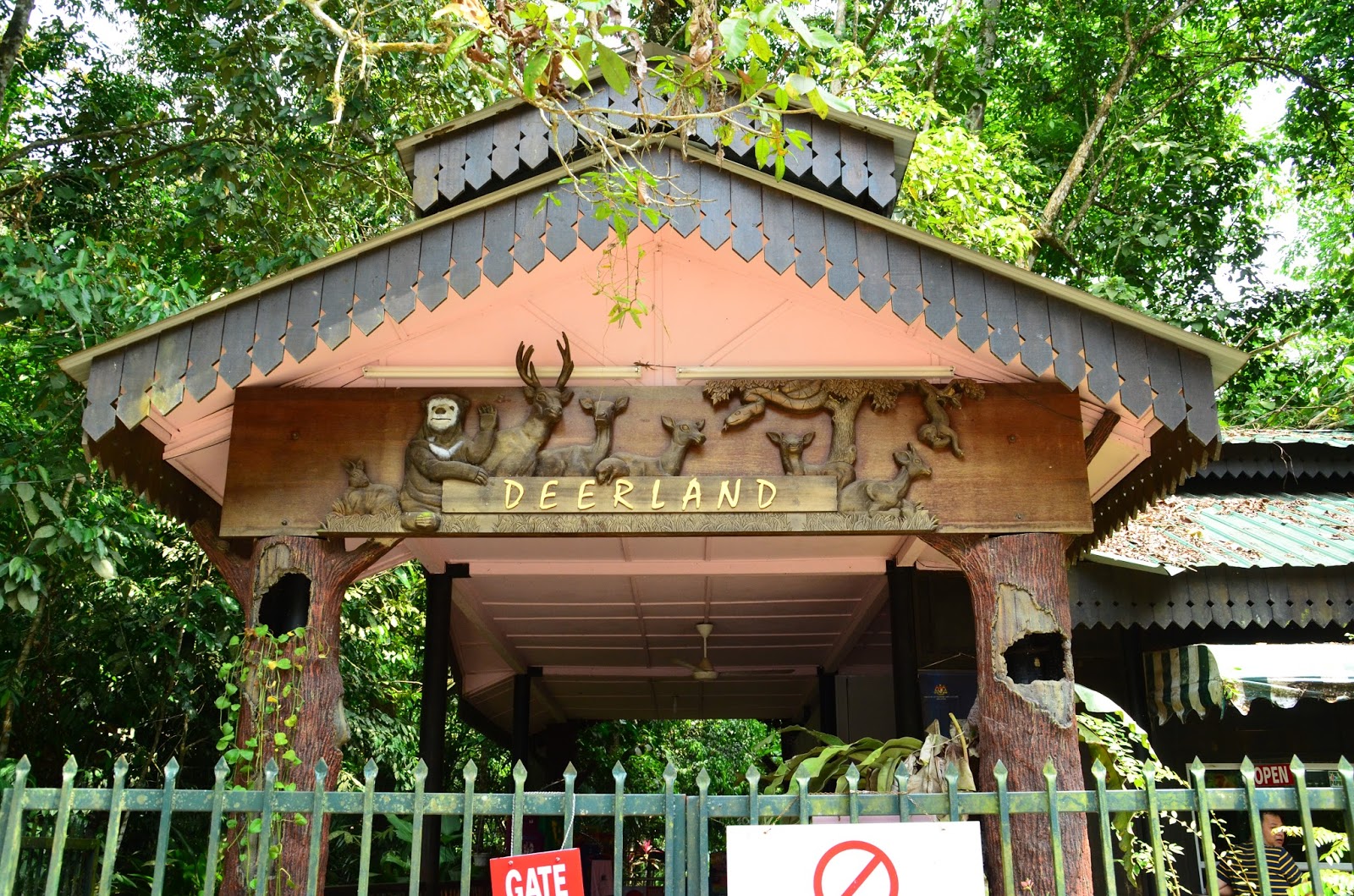 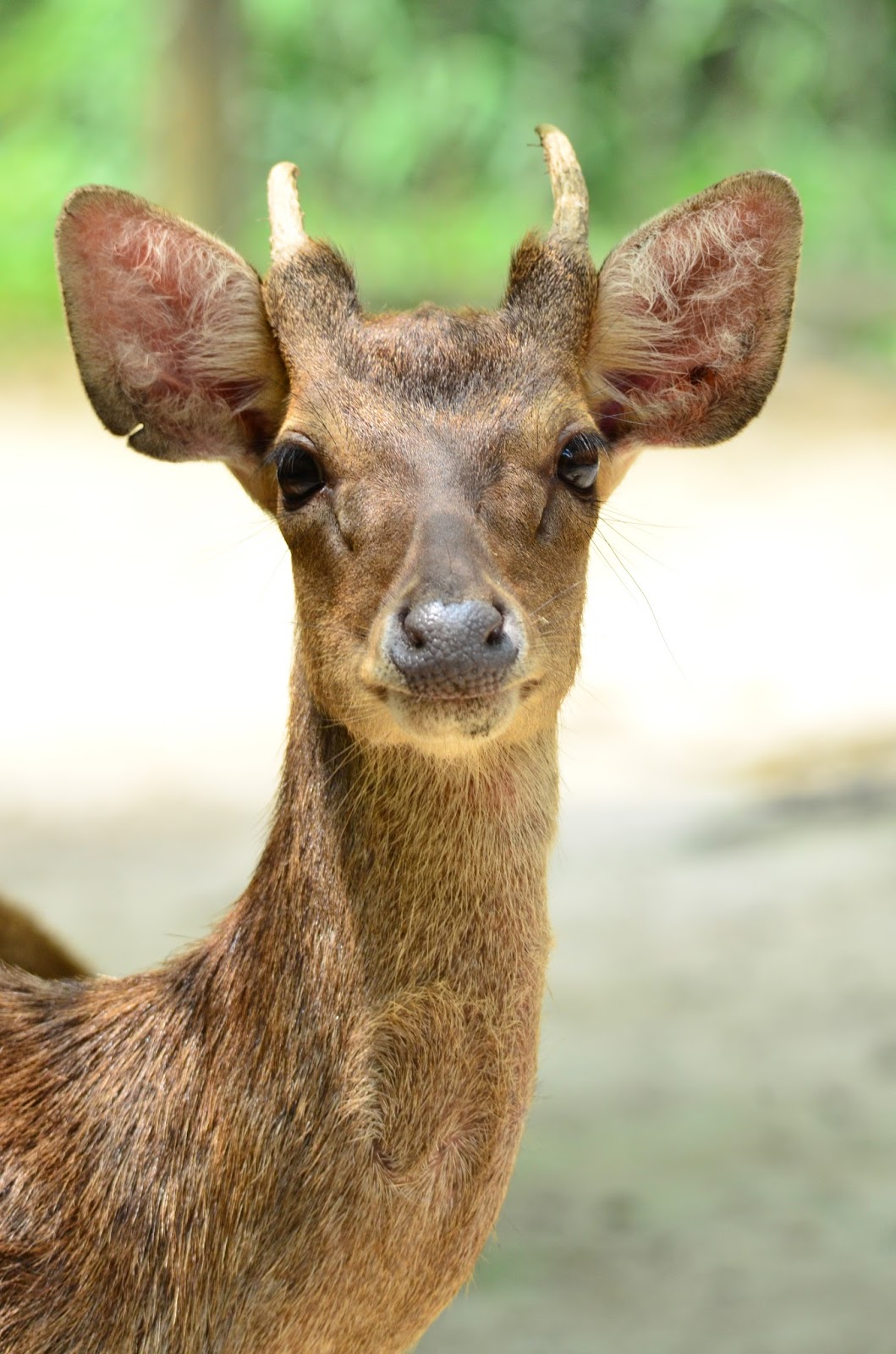 Deerland was an interesting place. It is no surprise they hold deers there but they also hold a lot more than just deers. For an entrance fee of RM6.00, you get to go in and see many animals. You get a small bowl of fruits to feed the deers with. Their habitat is very spacious and many deers roam about. The does look petite and cute while the big stags look absolutely handsome. I love deers, they look so... serene, if I may say so.

They hold many animals such as the Mandarin Ducks, ostrich, peacocks, chipmunks, love birds, snakes, lizards and a lot more. The keepers there are very kind and friendly. I was given the opportunity to hold a lizard and a hedgehog (surprisingly, not pokey but rough) and managed to touch a snake although you can carry it if you want. What beauties they are! I don't see why people think reptiles are ugly. I think they are absolutely gorgeous. Of course.. if they're not going to eat me, that is. It was real fun there! Some cages have information about the animals however some don't or at least I can't really find them. 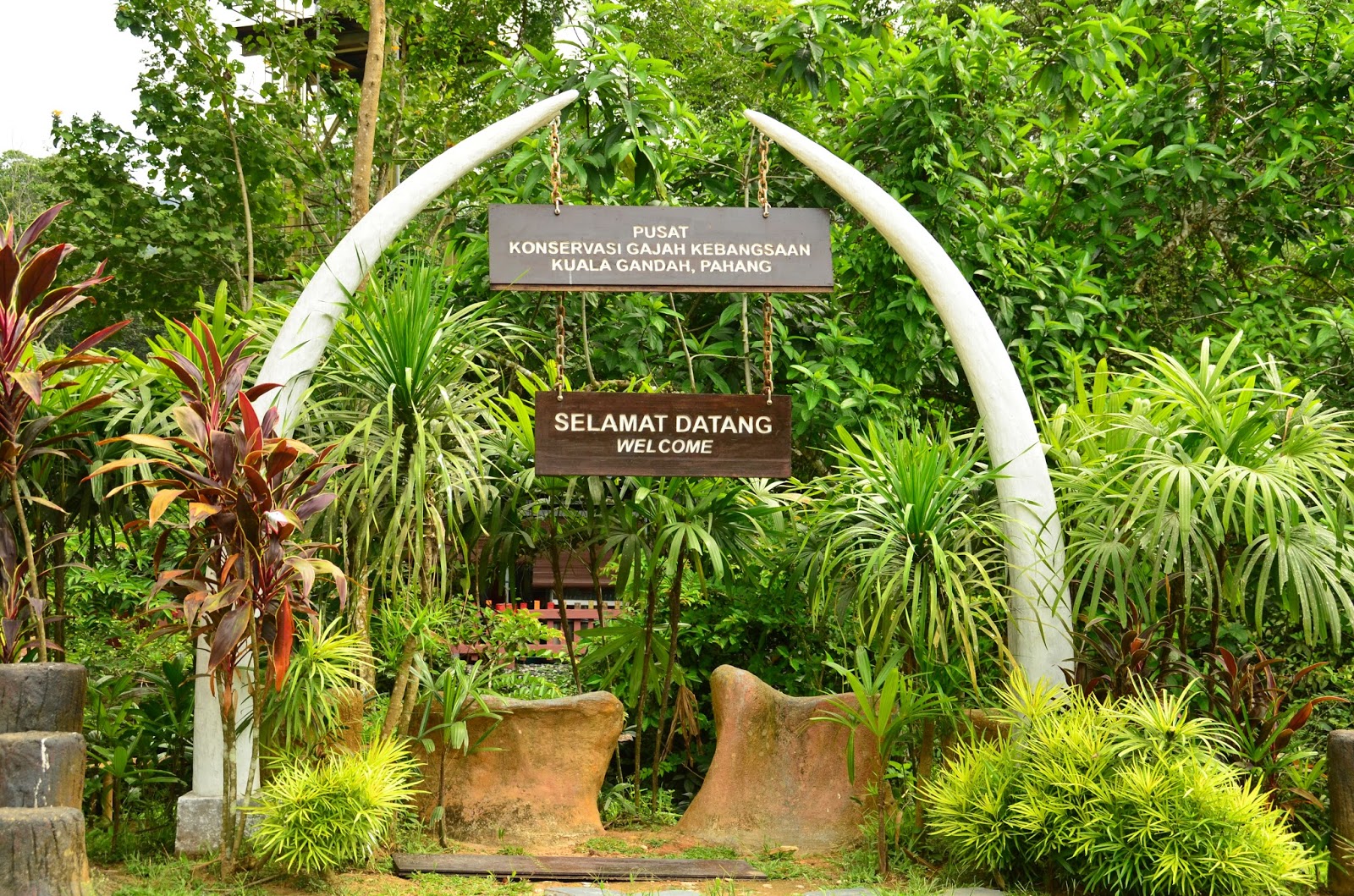 
If you get to reach a little before 1400 hours, you can actually buy some goodies for the elephants to eat. We had to register at the office, filling up forms and stuff, we talked to the person behind the desk, he was really friendly and funny. The entrance was free but we also filled up a donation form and we all chipped in for donation, it wasn't much as were only students. The people here are really nice. It was a wonderful experience to have touched and fed elephants. They really are gentle giants. I love watching Nat Geo Wild and to learn about them on tv, how they are huge and strong but they are also very gentle at heart. I wanted to see these magnificent beasts up close. Only three elephants were up on display for the tourists to feed. The other older and younger ones were kept onside for reasons, I'm not sure. However, the ones that we fed was more or less youngsters, around the age of six years. They were smart and cunning, like children. They would reach out with their trunks and grab whatever grub you can offer. At first, they would eat each time you give but after a while, they will hold about three bananas in their trunk and once they can't collect anymore, only then they will eat it. They can also be quite picky after a while. Many people go for the sugar cane and once they had a lot, they want the other stuff.. So they'll take the sugar cane from you and toss it one side in their room and hope you give it a better option. I bought peanuts because I was also curious to see how an elephant pick up something so small that it's trunk can't wrap around. It will inhale so the peanuts will be in the trunk's grasp and then it will clench it to put it in it's mouth. It's amazing!

At 1400 hours, they will play a video regarding the works that the locals do help and rescue the elephants. It was very interesting to watch because you don't really get shows like this on the local channel. I wanted to see what us locals do to help wildlife. It was interesting how they help elephants. Due to diminishing forests, they have to transport wild elephants to Taman Negara (one of Malaysia's biggest forest reserve) for a better chance in survival. Unfortunately for some reason (I was not punctual when the video started) they had to separate a herd. They used tranquilizers to subdue the elephants and then transport them via trucks and ships. Due to the unfortunate lack of funding, their means of doing so is not so refined but they do their best and in every way to ease the elephants. Because being wild and free then all of a sudden caught and chained, they bring in trained elephants to comfort the wild and terrified ones. Their trunks would caress their faces letting them know it's alright. It was a really touching thing to see. Sometimes, the transport is too exhausting and stressful for them, there are cases where they will die on the way. It's a tragedy. You could feel the sorrow in one of the rescuers voice. They are making the best of a horrible situation.

After the video, we exit to the lobby. In the centre was an elephant skull and information of it's molars. An elephant goes through six molars in it's life and once the sixth molar falls out, the elephant can't eat anymore and will die of starvation. Interesting but sad... They also had artificial elephant skin for you to know how it feels like. There were two exhibit. There were also many posters with many interesting facts about elephants. Some, I already heard on Nat Geo but the rest were really fun to have learned about. It really hit me close to heart.. A girl from the city has actually met and touched a real life elephant and to be able to see these gigantic beasts and know more about them is... I don't even know how to describe it.

After the video, at 1500 hours, there is an elephant show which also includes bathing the elephants. Unfortunately, due to the raining season, the river level is high and the current strong so we couldn't get to bathe the elephant but we watched the keepers bathe them and it looked really fun. I wish I could have been a part of it but even if I could, I had my camera with me and I do love photographing moments like these; animals and humans connecting. Once the elephants were bathed, they return to the stage and perform their acts (there were six of them). The announcer will give us little facts about elephants and the elephants will perform them like how the keepers climb on them, how they sleep, they have excellent memory etc. The announcer also introduced them by name and age. The performing elephants are quite old and seasoned, around the age of 35 years old! He also mentions where they were rescued, mainly Johor and Perak and they also have an elephant rescued from Myanmar. They also showed the three youngest elephants. They were really cute. The youngest is six months old abandoned by the mother and is named Lanchang (after the place it was found). They show how they feed a baby elephant and it was so adorable as the little baby will follow the keeper with the bottle of milk around After the show was done, all the performers said their thank you by nodding their heads and making noises. It was really cute. They then provide us with papayas to feed the elephants. They brought out Lanchang so everyone can pat it and take photos with it.

After that, we left for Lentang Forest Reserve... 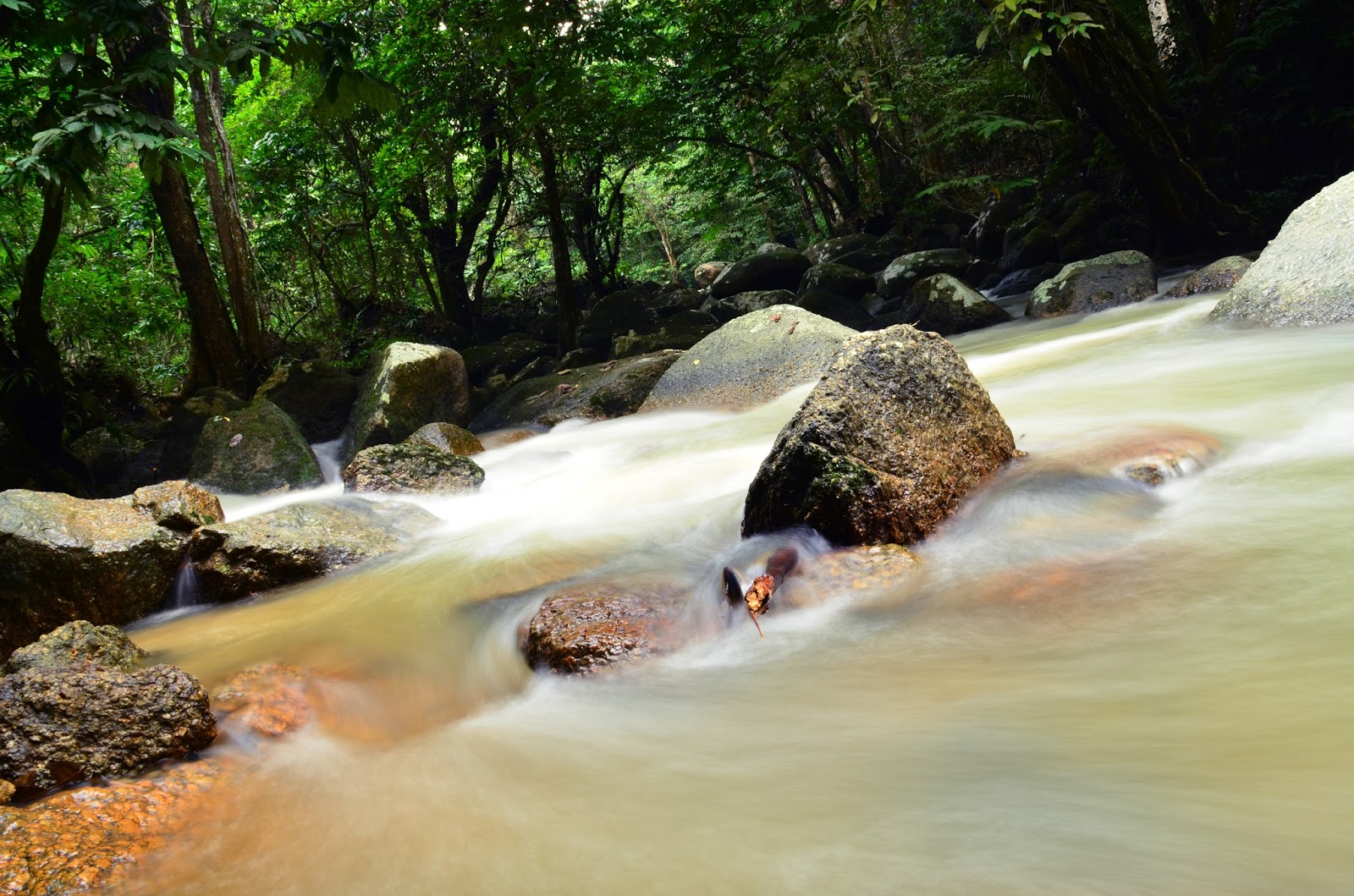 In the local tongue, Hutan Lipur Lentang. Many locals come here to bathe in the cool waters of the cascading waterfalls. This spot doesn't involve any trekking, really. The water is nice and cold with is great after the hot day we had. We brought out our sandwiches and chips to eat for tea. It was a nice end to our little road trip. To use the washroom, we had to pay 30 cents for it. 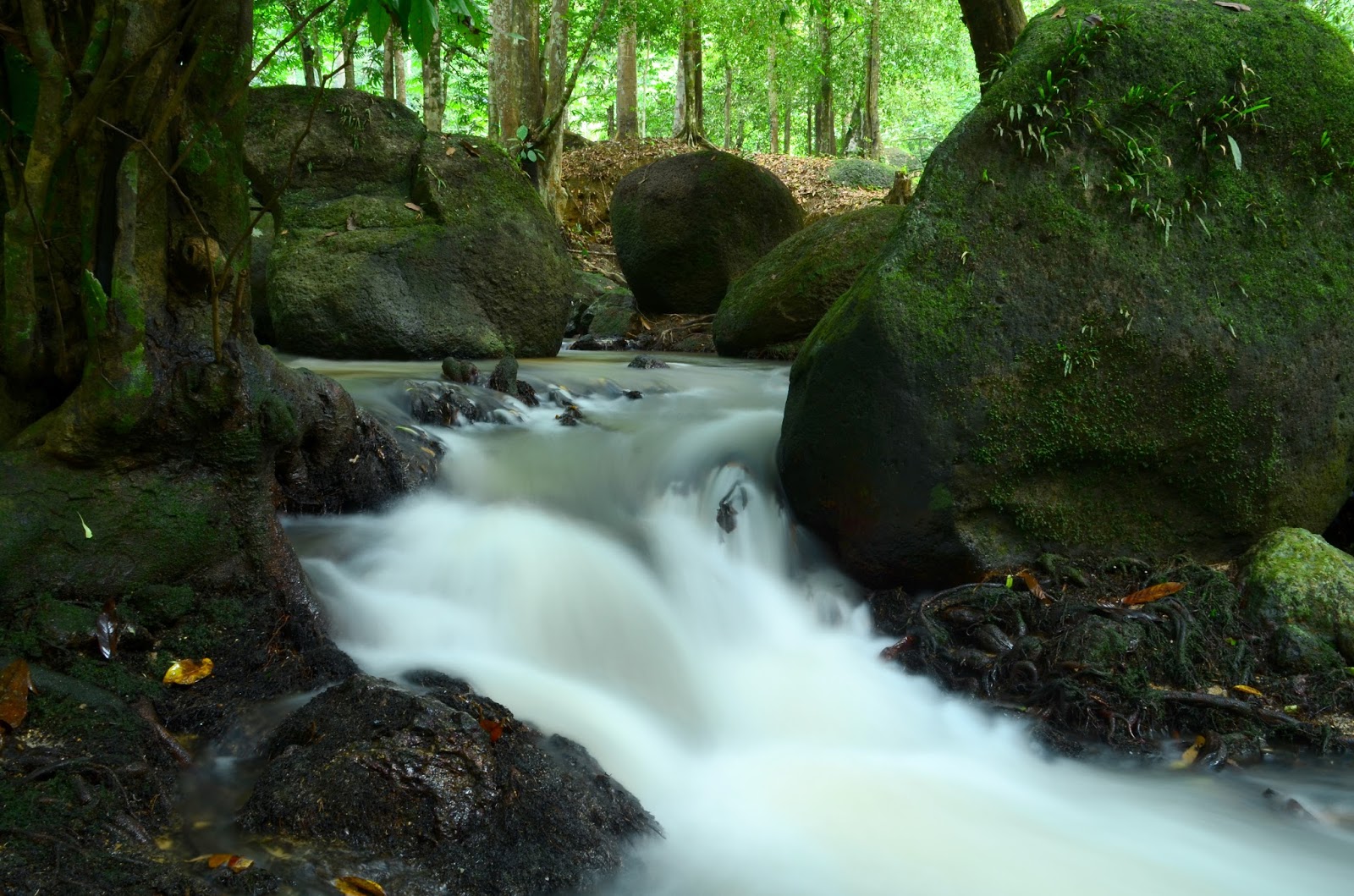