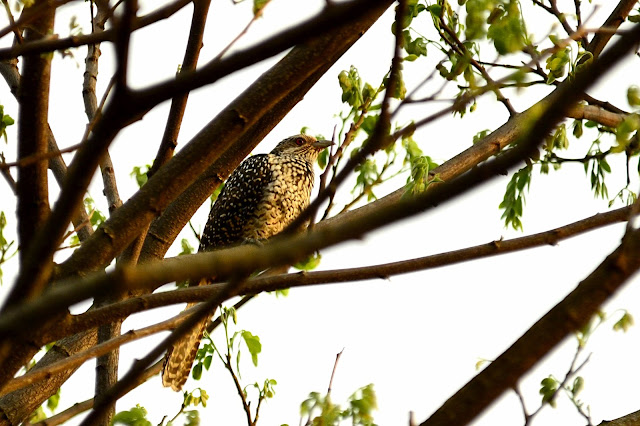 (Female) It has similar features except for the fact of it's plumage, being brown with spots.

The Asian koel is a large, long-tailed, cuckoo measuring 39–46 cm

Family: The Asian Koel is a member of the family of birds under Cuculiformes. Within this family, there are also birds with names that we are all familiar with such as Cuckoos, Malkohas and Coucals.

Behaviour: The Asian koel is a brood parasite, and lays its single egg in the nests of a variety of birds, including the house crow. In Southern Thailand and the Malay Peninsula, koels have shifted host from crows to mynas as the latter became more common in the late 1900s. In South Asia they have sometimes been found to parasitize the black drongo, the European magpie and possibly the black-headed oriole. Males may distract the hosts so that the female gets a chance to lay an egg in the nest. More often however, the female visits the nest of the host alone The chicks of the koel hatched about 3 days ahead of the host chicks. Koels usually lay only an egg or two in a single nest but as many as seven to eleven eggs have been reported from some host nests. A female may remove a host egg before laying. Eggs hatch in 12 to 14 days. The young koel does not always push out eggs or evict the host chicks, and initially calls like a crow. The young fledge in 20 to 28 days. Unlike as in some other cuckoos, the young do not attempt to kill the host chicks, a trait that is shared with the channel-billed cuckoos which are also largely frugivorous as adults. Adult female parents have been known to feed young koels in the nests of the hosts, a behaviour seen in some other brood parasitic species as well. Adult males have however not been noted to feed fledglings

Diet: The Asian koel is omnivorous, consuming a variety of insects, caterpillars, eggs and small vertebrates. Adults feed mainly on fruit. They will sometimes defend fruiting trees that they forage in and chase away other frugivores. They have been noted to be especially important in the dispersal of the sandalwood tree in India. Large seeded fruits are sometimes quickly regurgitated near the parent tree while small seeded fruits are ingested and are likely to be deposited at greater distances from the parent tree. They have a large gape and are capable of swallowing large fruits including the hard fruit of palms such as Arenga and Livistona. They have been known to occasionally take eggs of small birds.
They feed on the fruits of Cascabela thevetia which are known to be toxic to mammals.