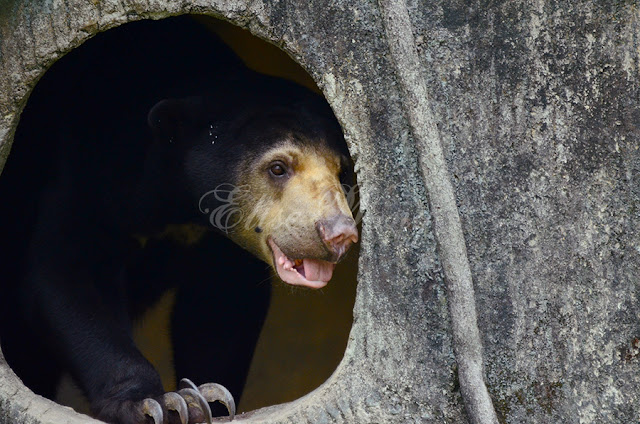 *you can check out my video review here.

I never went to any zoos overseas so I cannot compare the quality and whatnot. Growing up, we tend to have a negative thought about Zoo Negara treating their animals badly. Now before you think I'm going to start bashing Zoo Negara and want to tick it off your bucket list. Just hold that thought..
So after hearing all the negative comments, It was time for me to pay a visit to see it for myself.. I got photos to prive it :)
I'm happy to report I saw no abuses at all. The animals showed no signs of starvation or mistreatment
I visited the zoo on 6th September 2015.

Before I go into it, I'm going to list down the ups and downs of the place;
+ The animals look healthy
+ The zoo has been recently refurbished to give animals a more natural environment and for them to roam about
+ It holds A LOT of animals
+ Some animal exhibits do not have any glass so it's great for photography.
+ It's clean
+ Friendly staff

- The easiest way to get there is by car
*According to their site, you can get there by;
By Light Rail Transit System (LRT) :
- Alight at Wangsa Maju Station, Kelana Jaya Line
- Board a taxi to Zoo Negara

- You have to pay for everythin there, map included although they have sign boards of maps around the area
- Panda bears are their biggest attraction of course but they can really milk you for it.
- Easy to lose your way if you have never been there before


We first entered from Entrance A and head over to Hornbill and Children's World first. The trip turned out to be quite an early disappointment with animals in a caged environment and it was cramped with vegetation in that cage. It was difficult to photograph the animal without the cage being in the photo. Also, the cage gives off a very dark and unhappy atmosphere when viewing the animals. If the whole trip was going to be like that, I would not feel happy. We then moved on to Children World. There are ponies, deers, goats and ferrets for the kids to see and perhaps pat them but this, I'm not too sure.

We then watched the performances animals which happens Daily: 11.00 am & 3.00 pm / 3.30 pm (Friday). They showed and explained the animals we saw. The bathroom.... I have no complaints for it. I mean, it was cleaner than I expected, it being a public toilet in a place where hundreds of people use everyday in Malaysia. But other people may have differing thoughts. We than checked out the penguins and the aquarium. The penguins were cute as usual but the display glass made it difficult for photographs and the environment didn'ts seem very interactive. It was just a rock shelter for the penguins to chill and a small pool for them to swim in. Not much going on there. The aquarium wasn't much better either. The place is very dim. A lot of information posters can't be read because it was too dark. Granted, they tried to build a cave atmosphere but better strategic lighting would have been great. I didn't finish exploring the entire zoo because I spent a lot of time in the aquarium which I did not expect but it was my first time so yea. It was interesting to see what fishes we had in Malaysia and in our neighbouring countries. Some mimic the environment they're normally found in like paddy fields or swamps. You can see the labels to describe some of the fishes and the companies that sponsors them. However, a lot of the fishes descriptions were missing so you won't learn what fishes they are.
After the aquarium, we went for the Bee Muzium and things are starting to look better from there. We met a friendly zookeeper, he saw me with my long lens and told me to stand next to him as he's going to feed the squirrels. He fed them grapes and explained it was a family of squirrels with the mother expecting her second batch of litter. He pointed our her littlbe belly showing and said the babies will be due soon. It was interesting to see. He then explained that the area we were in now is the Old Zoo and it's still undergoing construction. He walked with us until the hippos. He said zookeepers will give a certain yell at the hippos and it will come out of the water (all the hippos were submerge in water). So he yelled a couple of times and slowly, they started rasing their heads above water and I took photos of them. Luckily, we bumped into him. He then said he has to get back to work and I thanked him.

Things started to look up from there as the exhibits that hold the animals were more spacious for the animals to walk about. It virtually had no cages and designed so the animal couldn't escape and yet feel at home. They have eliminated the concept of cages and with just that, the place starts to look better. Not the entire zoo has been renovated and some spots are still old. Some exhibits are still new that animals have not been added. As you walk, you may notice signs saying that a certain animal is being sponsored by big companies. I suppose that's where they manage to get enoug funding to upgrade the zoo. It was nice to see that things may start looking up for Zoo Negara. There were many information boards about the animals you see that I learned animals that can be found in Malaysia. I had no idea Porcupines were local! But that's why I felt the need to start Malaysian Beauties Project. It's also a journey for me to learn about our local animals.

Now, the main attraction.. the pandas! Now, for those who don't know; In 2014, two pandas were loaned from China to Malaysia. I think it was safe to say people were taken aback that China entrusted Malaysia their precious assets, especially after the unfortunate event of MH370. The delivery of pandas were delayed but were sent over nonetheless as it was an effort to strengthen the ties between the two countries. This year was a special one as the two pandas successfully mated and has given birth to a baby panda! Because of this, both the mother and infant was quarantined. The fees to viewing the father panda did not differ but they took the initiative to tell you the fact that you'll be paying full price to see the male panda only. Me being the first time to has never seen a real life panda before but come on! Everybody loves pandas!! So I agreed to the price. I was so going to regret it later. Now, I said Zoo Negara is going to milk you out of your money a bit, right? You have to pay for the map (although I think it's not necessary, there are map boards around for you to find your way), you have to pay for the train ride and when you enter the panda enclosure, you're only given twenty minutes! Well, you can't make loud noises or use flash when photographing the panda, I think that's fair. But the thing that bothers me was the time limit and the fact that once you leave the enclosure, not the building, the enclosure. You can't return in. I was carrying my camera gear the entire day without rest, I hardly sat down and Male panda wasn't doing much other than having a bunch of bamboos on his belly and eating them so I thought we could leave the enclosure and sit down in a cafe in the next room. We ordered panda cupcake (yeah, it's no good. It's utterly dry in your mouth. It taste like flour with cream in your mouth. There wasn't much of a flavour.) So after taking a break, I felt more energized to continue. When we entered the panda enclosure.. Guess... what? They told us we cant come back and have to leave. We paid extra to see the panda, not an extra RM10, or RM20 but RM32! So yeah.. I was hoping it could be more generous than that. Another point of milking our wallets dry. Before entering, a man photographed us behind cut board animals as a token of memory here at Zoo Negara. He gave us a slip of paper and we could buy it at the counter as we exit the building. The photos were nice but the prices were far from that. It was really expensive! I wouldn't mind paying a little extra to help sustain the zoo but that was just too much.

Now it is nothing like the issue of NatGeo I read from my grandfather's collection, July 1993 where they were going for a real natural environment. Not only does it look great but they really tried to give the animals the closest things to natural life as possible. If I remembered correctly, they would hide fruits in trees for the bears to find them to keep them active. However, I feel Zoo Negara has potential especially with peopel being more concerned about animal welfare these days and the fact the animals are being sponsored by companies. You can head over to their website to figure out how to sponsor them.

There was an article I read on Sunday Express, Zoo owner Damian Aspinall says to abolish all zoos. He had very valid points, saying most of the animals in zoos are not endangered and that zoos should steer to a much more conservation approach, housing only the really endangered species and help them by multiplying their numbers and returning them to the wild. I have linked the short article below if you like to read his points.


I would give this zoo a 6/10. There were no signs of animal abuse and it was very educational for me. I like that they abolished the concept of cages and it looks much more new and improved! However, I was a little disapoointed about my visit to the pandas and I did not give the ratings any higher because I feel that can wait until my next visit when the zoo has completed it's renovation and upgrade. As you visit the site, it has warned you that certain parts are closed as they are waiting their new arrival of animals.


Here are some of the photos I manage to take whilst in the zoo. Hope you enjoy :)