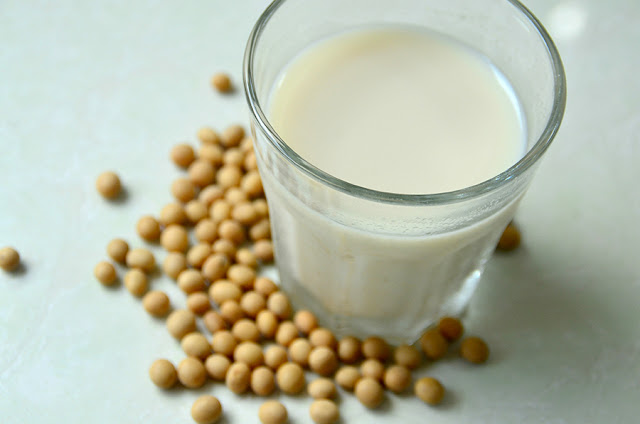 Soymilk is real easy, not to mention real cheap and resourceful. However, some can say it's pretty time consuming. The steps are repetitive. I usually do this in the morning on weekends. Drinking soymilk (or any other vegan milk for that matter) is better for the environment and animals than cow's milk. The obvious reason is not harming the cow but it also saves on a lot of water. Water is used greatly each day and often taken for granted. Most of household water consumption is in the washroom; flushing, washing hands, bathing. A lot of people still don't see the importance of water and how quickly we're using it, much more than it returning to the earth. How does soymilk help? For example, using 3 cups of water to make soymilk will give you a little less than 3 cups of soymilk but give a cow 3 cups of water, it will not produce 3 cups of milk. The price is also sold much cheaper with half the price of cow's milk. With that being said, I hope you enjoy this soymilk recipe and take a moment to appreciate one of earth's most valuable but often taken for granted resources; water.

Soy milk is real easy to do but a little labour intensive, soak the beans overnight or at least 8 hours. Bear in mind that soy beans will expand three times it's size when fully soaked so make sure there is enough water when doing this. I use tap water for soaking but filtered water when blending.

For every cup of soaked beans, add 3 cups of water into a blender, like so and blend for 2-3minutes; 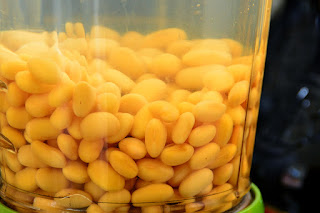 After blending, you're going to have to sift and separate the milk from it's by-product (okara). Use a big bowl, a fine sift and a cloth on top to help squeeze out the liquid and separate out the solids. Some people use cheesecloth but I just bought a simple muslin cloth from Kamdar. 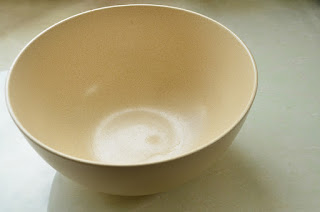 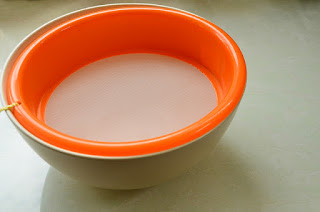 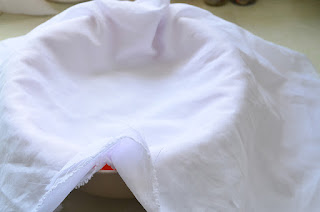 Pour the blended soybeans into the cloth, slowly squeeze out the liquid as much as possible. What is left will be the okara and the milk is collected in the big bowl. I keep the okara in a container for later consumption (don't eat it on it's own like that, it's for cooking/baking) then I pour the milk into a pot. Note that any form of soy is not consumable until cooked. 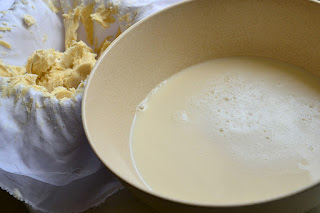 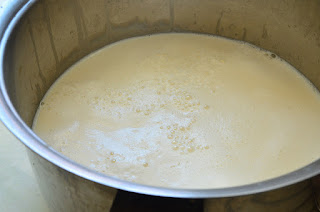 Let it boil for 20 minutes. I add in some pandan during the boiling time. Sometimes I use the induction cooker so as to not use gas but know how to control the heat so the bottom won't be burn. I pour the plain soymilk in a bottle and save it for any future vegan recipes that calls for milk. Then I add in the brown sugar. Adding sugar or some syrup while boiling gives off a distinct after taste which is not very favourable so I add any type of sugar in when it's hot but not during cooking. And that's it!

DON'T THROW THE OKARA AWAY!! I make some pretty good tasting brownies with it. I also use them to make vegan burger. If you don't plan on cooking it, you can use it to fertilise the plants like how I use used coffee grounds as organic fertilisers. You can also check out The Okara Project. I got the vegan brownie recipe from her and tweaked it for my own palette.

You spend less than RM 4 to make about 6-7 bottles worth of soymilk and lots of okara to cook from. Money's worth, aint' it? Hope you enjoy.