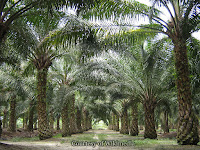 Malaysia, being one of the biggest palm oil producers (Unfortunately, palm oil also being one of the biggest factor for habitat destruction due to deforestation for it's plantations) and there was a big problem that every farmer faced; rats. They used poison at first but decided to opt for a more natural solution. The farmers tried to use snakes but they ended up eating one another. They then tried cats but they also ate the lethal bait which were meant for rats. Eventually, the farmers thought to introduced owls into the plantation. They were considered extremely rare until the 1970s. As palm plantations grow and spread, so did the barn owls.

They are, however, the most widely distributed species of owl. There are 16 species worldwide and 2

species which occur in Malaysia. They are medium-sized birds and are pale-coloured with long wings and a short, squarish tail. Their size may differ considerably from species to species. The bird's head and upper body typically vary between pale brown and some shade of grey (especially on the forehead and back) in most subspecies. Some are purer, richer brown instead, and all have fine black-and-white speckles. The heart-shaped face is usually bright white, but in some subspecies it is brown. The underpart feathers, vary from white to reddish buff. The barn owl is the most widespread landbird species in the world, occurring in every continent except Antarctica. Like most owls, they are nocturnal but are also known to hunt occasionally during the day.

Barn owls are well adapted to hunt in total darkness. It’s eyes are considerably big for it’s skull and are fixed by a ring of bone which unables it to move it’s eyes like we do. To compensate, it can rotate it’s head to an almost 250 degrees. Owl’s eyes are the most forward facing in the bird world allowing to gauge the distance between them and their prey very well. When it catches a mouse, it will lean forward upon impact to crush the mouse’s head or neck. Their hearing is much more impressive than their sight. Their ear openings are concealed under the feathers of the facial disc. They’re much larger than in other birds and is covered by an ear flap which is moveable. They are used in the same way as a deer moves it’s ears to locate sounds. The ear flaps of the barn owl is asymmtrical. This placement exaggerates the displacement of sound waves ans helps the owl to pinppoint the source of the sound. Even their wings play an important role when hunting, the edges of most of than main flight feathers are serrated and it’s underside is shiny, allowing for silent flight. Basically it’s entire body is built for silence. 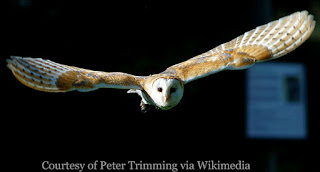 The barn owl hunts by flying slowly, quartering the ground and hovering over spots that may conceal prey. It may also use branches, fence posts or other lookouts to scan its surroundings, and this is the main means of prey locat­ion in the oil palm plantations of Malaysia. The bird has long, broad wings, enabling it to manoeuver and turn abruptly. Small prey is usually torn into chunks and eaten completely including bones and fur. After about 4 hours of digestion, the fur and bones are collected to form a pallette within the owl to prepare it for regurgitation, much like a hair ball.


Barn owls living in tropical regions can breed at any time of year, but some seasonality in nesting is still evident. Where there are distinct wet and dry seasons, egg-laying usually takes place during the dry season, with increased rodent prey becoming available to the birds as the vegetation dies off. Barn owls are usually monogamous, sticking to one partner for life unless one of the pair dies
Barn owls are cavity nesters. They choose holes in trees. Before commencing laying, the female

spends much time near the nest and is entirely provisioned by the male. During the incubation period, the male owl often brought food for the female and each time he presented himself with food, copulation took place. The female lays eggs on alternate days and the clutch size averages about five eggs (range two to nine). The eggs are chalky white, somewhat elliptical. The incubation period is about thirty days, hatching takes place over a prolonged period and the youngest chick may be several weeks younger than its oldest sibling. The owlets are fed in order of seniority so when there’s a shortage of food, this means the youngest owl will die and it’s carcass is left to be eaten by the rest of the family. This is so during the hard times, at least some of the young will survive. 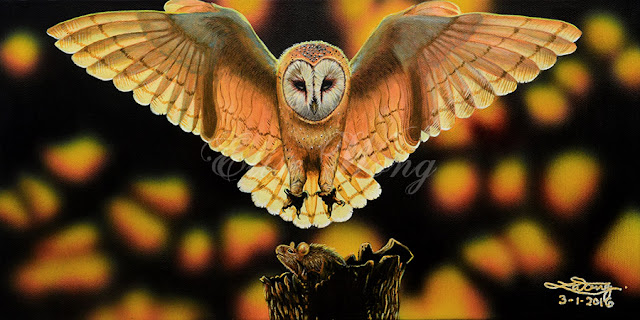