This is a piece that was inspired by double exposure photography and I thought to do one in digital painting. The clump of trees represent the nicely dense forest, a safe haven where animals can go to and these are the animals that are currently endangered; Asian elephants, tiger, sumatran rhino, tapir and sambar deer.

I really wanted to show the conflict between nature and technology. Because we (I'm a city slicker born and bred) never have first hand experience about nature, we never give a second thought about what's affecting the forest these days.

Fact 1: Malaysia is the second largest palm oil producing country so a lot of deforestation occurs in order to mnake way for new crops. Because of that, a lot of animal lose their home.

Fact 2: A lot of buildings are being erected these days. For example, there was a plaza in my neighbourhood that's more than half empty and already they are building a complex three times bigger within the same neighbourhood. The reason why we moved was to get awat from the city but "advancement" seem to be following us. Some of the housing areas here are not even occupied and they are constructing more condos. Why? It's not necessary. The world is already showing signs of overpopulation....

Fact3: In 2015, we had a draught problem. We were worried there wasn't enough water in the catchment area to quench the people's thrist, to the point that water rations were carried out which didn't really help, in fact, I think it did more harm than good. We ended up collecting so much water that we waste more water than save. Solution? The same year, it was announced they were going to construct 4 highways through forest reserves and catchment areas!! It's called the EKVE development. People were actually listening to what was going on and they voicing out their denial over the fact, there were petitions being done but no one heard us. The green light was given that very year to go ahead with construction. The idea for building this highway was to make traffic smoother. But weren't we facing a water problem the other time? Was it really bad that we had to do water rationing? And you want to build a highway through catchment areas and forest reserves??? And it's called forest reserves for a reason. It's to protect the forest and the animals.

Although Malaysia doesn't sound like a coutnry that cares for it's ecosystem, there are some who intend to bring about change for the better albeit being slow. For one, Johor and Perka has implemented a ban on plastic and styrofoam. They're going to implement it in stages and hopefully to implement it fully in June 2017. Another success was a ban for shark fin soup in Penang. Penang is a known place for food for tourism. I'm not sure about the consumption of shark fin soup in Penang is high but it's a good change nontheless. Another change is big companies such as Berjaya Corporation and TNB that are having projects to replant trees. TNB, (Tenaga Nasional Berhad) which is the national supplier of electricity, they have implemented a project to plant 11,000 trees in 11 selected regions in Peninsular Malaysia. Because they have to cut down trees to build electrical towers, they have a concept for a tree for a tree. Lastly, in 2015, citizens have to start recycling.

So these are the things that went through my mind when I painted this :) 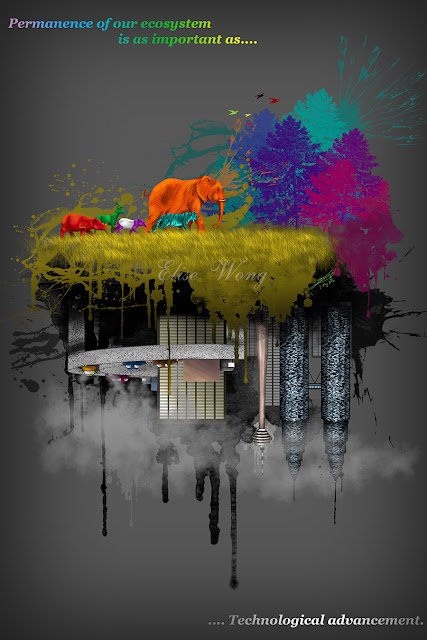 
If you'd like to read more about what I mentioned, you can find it here;
EKVE highways
http://charleshector.blogspot.my/2015/11/azmin-will-there-be-3-more-tol-highways.html
http://www.themalaymailonline.com/malaysia/article/highways-not-answer-to-internal-city-congestion-town-planners-say
http://www.wwf.org.my/?20506/Stop-EKVE-Development-and-Save-Our-Water-Catchment-Forests